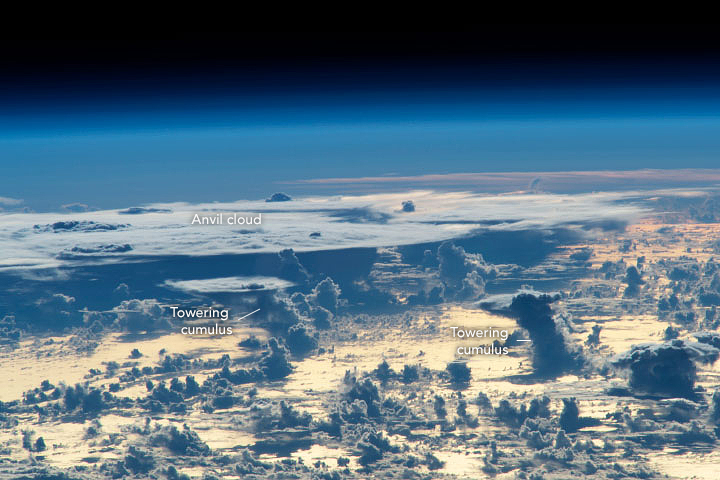 This oblique image looking eastward toward the sunlight of dawn was taken by an External High-Definition Camera (EHDC) on the International Space Station. The station was orbiting over the northwest Atlantic Ocean, about 500 kilometers (300 miles) off the coast off Nova Scotia. Numerous small clouds cover the foreground of the image. Each cloud represents in visible form (due to water droplets) a rising column of air. These are known as towering cumulus clouds.

Some very large thunderstorms appear toward the background of the photo, and several have extensive “table-top” features known as anvil clouds. These flat cloud surfaces develop when rising air reaches a level in the atmosphere where it is prevented from rising further (known as an inversion layer). At this level the cloud is forced to expand sideways, thus developing an anvil shape that can spread horizontally for tens of kilometers. Two of the towering cumulus near the center of the photo have just reached this altitude and have begun to spread out horizontally.

The image captures fine details of the cloud structures because the camera was looking partly towards the light source. This photographic technique reveals the cloud shadows, and this contrasts strongly with the brighter cloud tops. The shadows also contrast with the light of dawn reflected off the sea surface.

ISS External High-Definition Camera (EHDC) photograph ISS066-E-37532 was acquired on November 4, 2021, with a D4 Electronic Still Camera using a focal length of 600 millimeters. It is provided by the ISS Crew Earth Observations Facility and the Earth Science and Remote Sensing Unit, Johnson Space Center. The image was taken by an externally-mounted camera on the ISS during Expedition 66. The image has been cropped and enhanced to improve contrast, and lens artifacts have been removed. The International Space Station Program supports the laboratory as part of the ISS National Lab to help astronauts take pictures of Earth that will be of the greatest value to scientists and the public, and to make those images freely available on the Internet. Additional images taken by astronauts and cosmonauts can be viewed at the NASA/JSC Gateway to Astronaut Photography of Earth. Caption by Justin Wilkinson, Texas State University, JETS Contract at NASA-JSC.

Looking toward the rising Sun, an external camera on the ISS was able to capture the details of rising cumulus clouds. 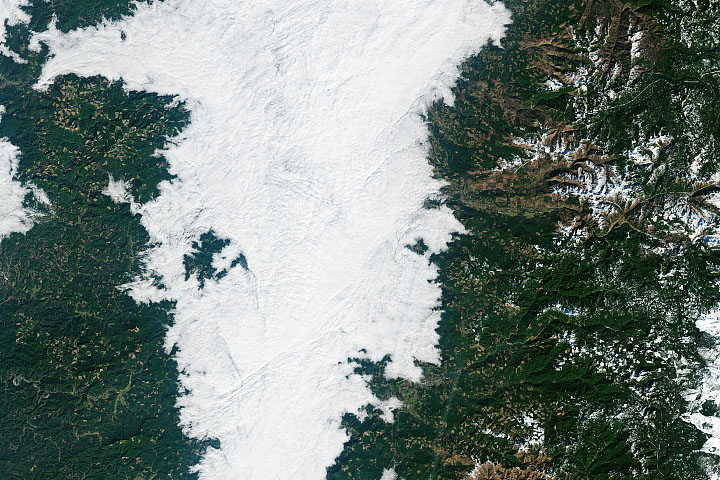 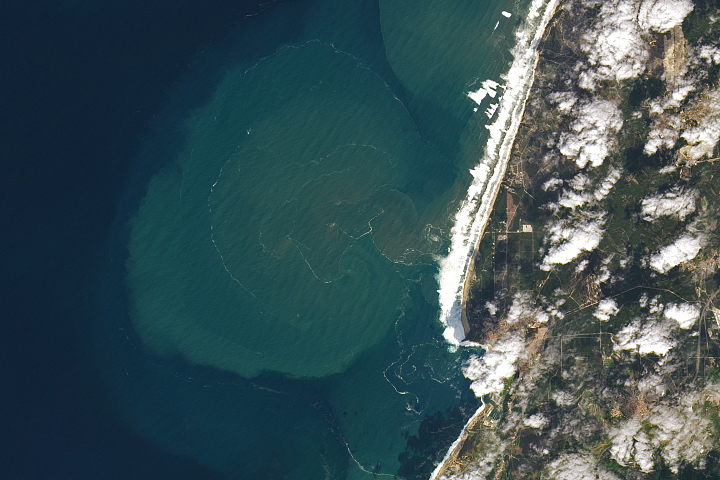