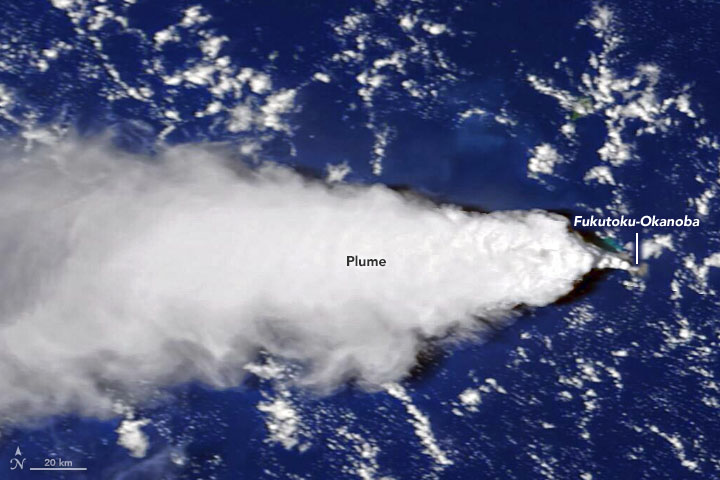 Over the past decade, the Japan Coast Guard has occasionally spotted patches of milky blue water about 5 kilometers (3 miles) north of South Iwo Jima island. The discolored water has been a subtle reminder that the summit of an active volcano—Fukutoku-Okanoba—lurks about 25 meters (80 feet) below the water surface.

On August 13, 2021, there was much more than just discolored water. A photograph taken by a Coast Guard aircraft flying near the volcano showed a towering plume of gas rising several kilometers into the air—a sure sign that explosive “Surtseyan” eruptions were happening.

Satellite observations and follow-up flights filled in more details. The Japanese geostationary satellite Himawari 8 was among the first satellites to observe the eruption, showing its beginning stages at about 21:00 UTC (6 a.m. local time) on August 12, 2021. When NASA’s Moderate Resolution Imaging Spectroradiometer (MODIS) sensor on the Terra satellite acquired its first image of the event on August 13, it showed a bright plume—likely steam and volcanic gases—streaming from the vent and stretching hundreds of kilometers to the west.

The longevity and vigor of the plume surprised some scientists. “What was remarkable about this eruption is that it went straight from being a submarine event to an eruption cloud reaching the lower boundary of the stratosphere,” explained Andrew Tupper, a meteorologist with Natural Hazards Consulting and a specialist in hazards to aviation. “That is not very common for this type of volcano. We normally see lower-level plumes from submarine eruptions.” 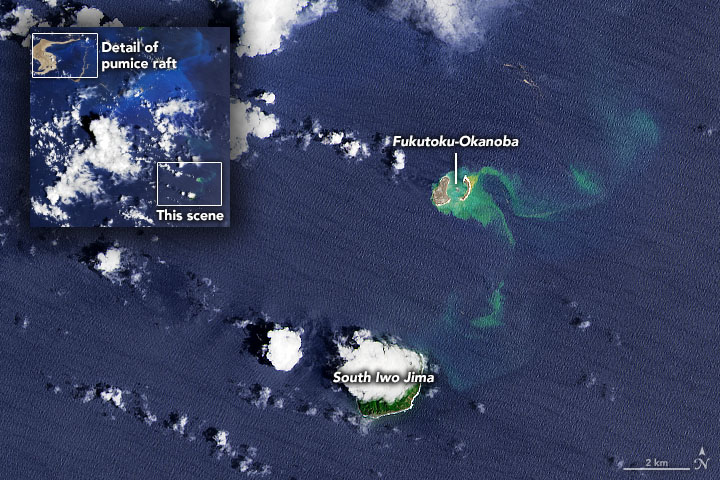 On August 14, NASA’s Cloud-Aerosol Lidar with Orthogonal Polarization (CALIOP) sensor detected the plume reaching as high as 16 kilometers (11 miles) above the surface, according to Ghassan Taha, an atmospheric scientist based at NASA’s Goddard Space Flight Center.

The amount of water in the vicinity of the vent plays a key role in determining the explosivity of submarine eruptions. “Explosivity is linked to the proportions of water and the erupting ‘stuff’—volcanic gases, ash, and lava,” explained Erik Klemetti, a volcanologist at Denison University. “Volcanoes with lots of water relative to erupting stuff are less explosive. Volcanoes with less water relative to the erupting stuff are more explosive. If this eruption was in shallow water, say just a few meters, then the presence of that water would have enhanced the explosivity.”

Scientists and aviation groups track volcanic eruptions closely because ash can pose a risk to aircraft. Volcanic ash is made up of tiny, jagged rock and glass particles that can damage jet engines and even cause them to fail. Ash poses a particular threat when it rises above the normal cruising altitude of jets—about 10 kilometers (6 miles). “The problem with fresh eruptions is that it can be very difficult to work out if it is safe for pilots to fly underneath due to the risk of falling ash,” said Tupper. In this case, the Tokyo Volcanic Ash Advisory Center at the Japan Meteorological Agency issued an ash advisory to pilots within a few hours of the eruption. Multiple Philippine Airlines flights to Japan were canceled as a result.

Fukutok-Okanoba left its mark on the sea surface as well. In the Landsat 8 image above, the sides of a new parentheses-shaped island outline the volcano’s caldera. It is unclear how long these features will last; the volcano has created ephemeral ash and pumice islands in the past that eroded away not long after their formation. According to Smithsonian’s Global Volcanism Program, the volcano’s most recent island formed in 1986. 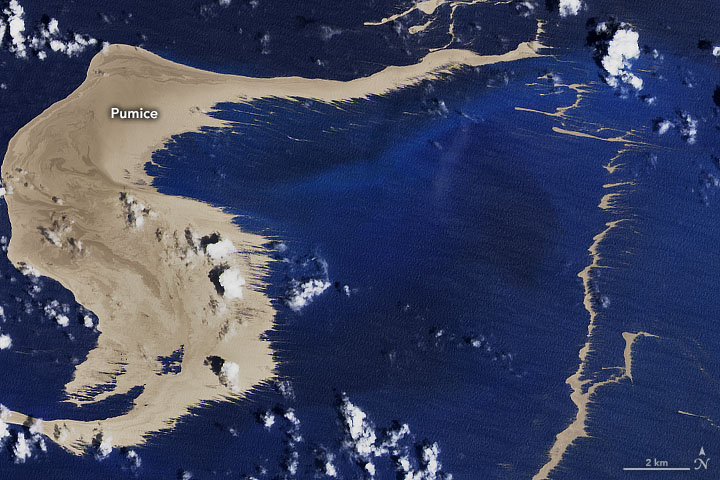 Pumice is one of the only types of rock that can float due to a combination of surface tension and the many air-filled holes and cavities found within the rock. Rafts of the rock can drift in the ocean for months or even years. As they drift, the volcanic rocks often pick up various forms of life, ranging from bryozoans to barnacles to crabs.

But what is home for marine life can be hazardous to ships. In addition to scratching hulls and propellers, floating chunks of pumice can clog cooling systems and engines. “Aviation and marine warning systems for remote submarine volcanoes are still very much developing,” said Tupper. “Combining cutting-edge satellite data with surface observations gives us the best possible chance to respond in time.”

The eruption of an underwater volcano near South Iwo Jima sent a plume soaring into flight paths and created an expansive raft of floating rock. 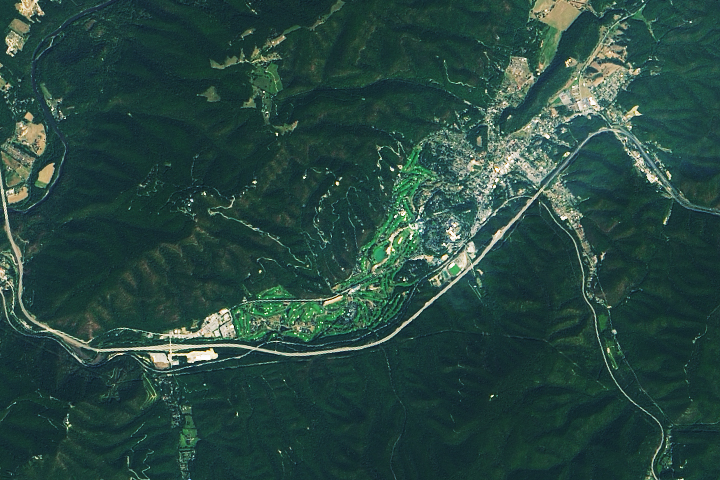 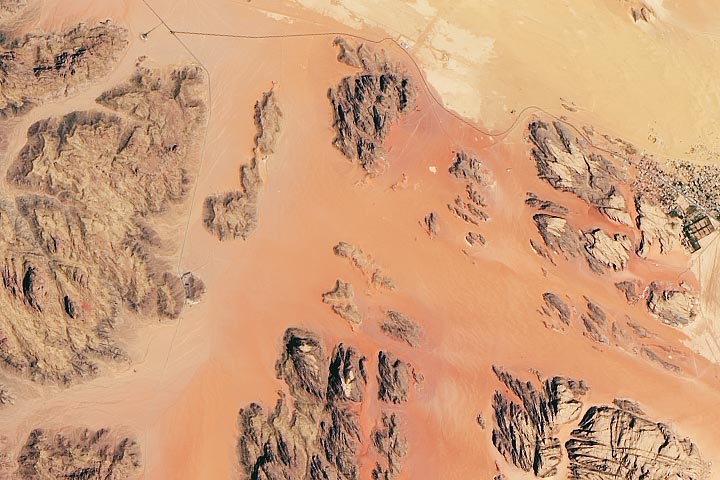 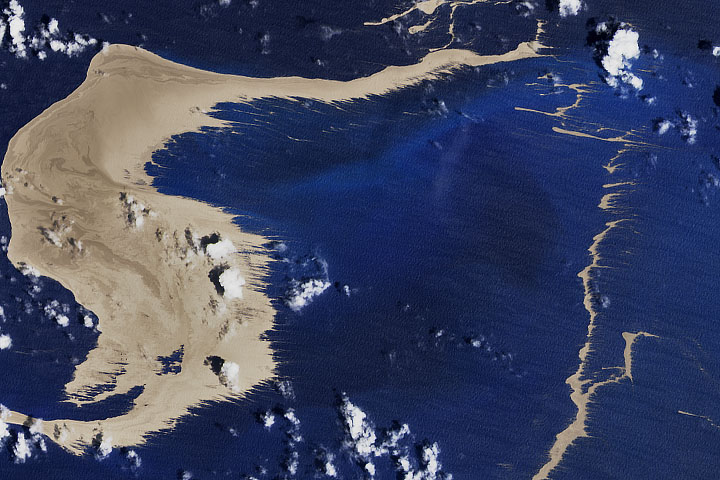