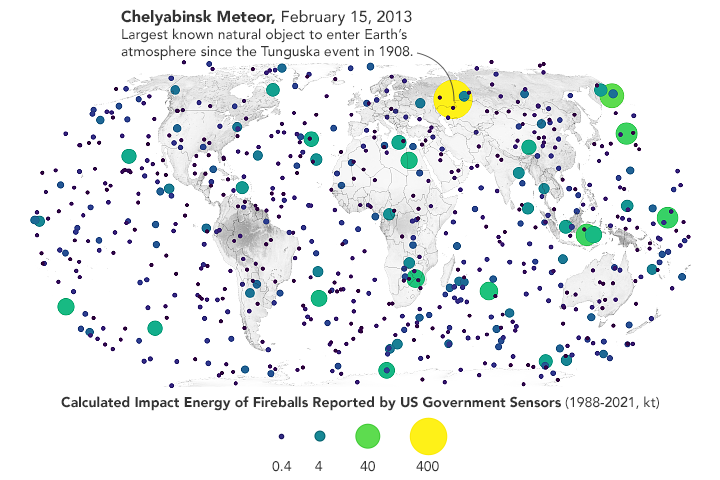 Abundant streaks of light have raced across the night sky this week during the peak of the Perseid meteor shower. The light show happens every year in mid- to late-August when Earth’s orbit intersects with the trail of debris left by Comet Swift-Tuttle.

While the Perseids and other major showers (Geminids, Orionids, and Leonids) draw the most attention, meteors are visible any time of the year, albeit at a slower rate. That’s because Earth is bombarded with heaps of dust and sand-sized particles every day. Sometimes, an object is large enough to produce a brilliantly bright spectacle known as a fireball. Fireballs are meteors that have an apparent magnitude of at least -5, making them brighter than Venus.

“More people see meteors during a shower because there are so many of them. For the Perseids, there are up to 100 meteors per hour,” said Paul Chodas, director of the Center for Near Earth Object Studies (CNEOS) at NASA’s Jet Propulsion Laboratory. “Fireball events, on the other hand, are quite rare and can happen on any day of the year.”

Data compiled by CNEOS scientists were used to produce the map above, based on an interactive version created by Alan Chamberlin. The map shows the locations of large fireballs detected by government sensors between 1988 and 2021. The size of each dot is proportional to the impact energy (kinetic energy) of each fireball; that is, the total energy the meteoroid brought into the atmosphere due to its velocity.

As a meteoroid cruises into Earth’s atmosphere, some of its kinetic energy is converted into radiated energy—the bright optical flash detected by the sensors. The rest is converted into sound waves and energy at other wavelengths. Some goes into a blast shock wave. By observing many such events, scientists established a way to determine the total energy of an event based its optical flash. From this, scientists can derive the original size of the object before it entered Earth’s atmosphere.

Using such calculations, scientists have estimated that the asteroid that lit up the sky in February 2013 over Chelyabinsk, Russia, initially measured 20 meters across. This is by far the largest fireball in the CNEOS database, which focuses on larger fireball events. All fireballs in the database stem from asteroids measuring at least one meter across.

In contrast, the meteoroids associated with a meteor shower—the stream of debris released from a comet or asteroid—are much smaller, generally ranging from the size of a grain of sand to tens of centimeters. Fireballs associated with meteor showers are possible but infrequent. Still, some Perseids can appear quite bright. 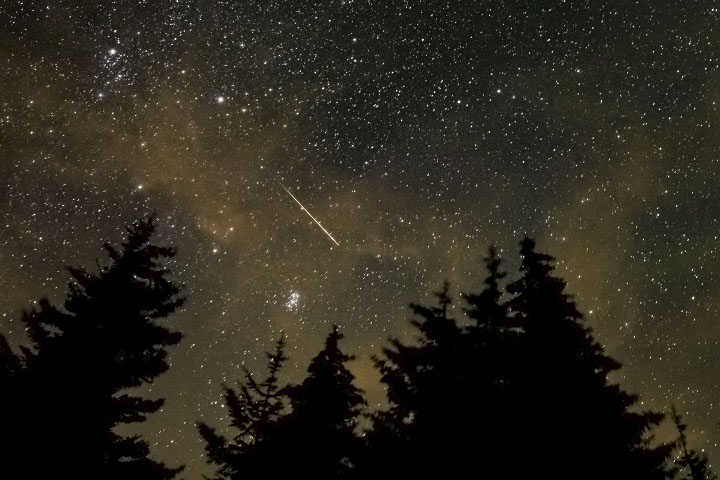 Meteors need not be fireballs to be photogenic. NASA photographer Bill Ingalls captured this photograph of a meteor zipping across the night sky on August 11, 2021, during the peak of the Perseid shower. Ingalls shot the 30-second exposure from the summit of Spruce Mountain in West Virginia. A few thin clouds lingered, reflecting light from distant urban areas.

Notice that part of the meteor appears green. According to Bill Cooke, lead at the NASA Meteoroid Environment Office, this is due to the way the meteoroid excited oxygen molecules during its impact with the atmosphere.

Cooke also noted that the Perseid shower is especially rich in bright meteors. He points to data from NASA’s network of all-sky meteor cameras , which can detect meteors that are brighter than Jupiter. “The number of bright meteors in the Perseids dwarfs all other meteor showers—30 percent more than the Geminid shower, which has better rates and is also noted for bright meteors,” Cooke said.

The peak of the shower occurred from August 11-13, but it’s not too late to catch a glimpse of the summer phenomenon. The meteors should remain relatively abundant in the nighttime sky for a few days after the peak. Beyond that, keep looking up; you never know when a rare fireball might brighten the night or even the day.