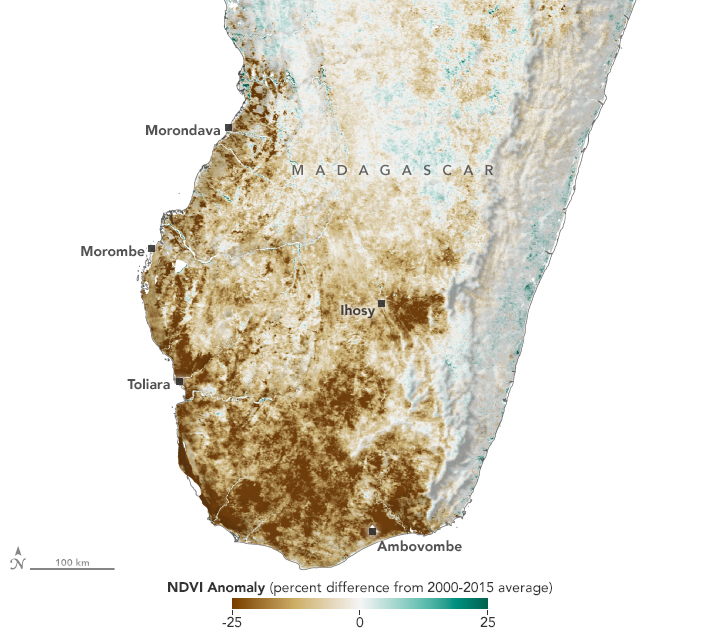 The southern part of Madagascar, the island nation off the southeast coast of Africa, is facing its worst drought in 40 years. The lack of rainfall and other environmental factors have taken a toll on the region’s vegetation and agricultural production, leaving many in the region facing severe hunger.

One way to detect healthy or stressed vegetation is with the Normalized Difference Vegetation Index (NDVI). The index, which uses data collected by the Moderate Resolution Imaging Spectroradiometer (MODIS) on NASA’s Terra satellite, provides a measure of the health of vegetation based on how much red and near-infrared light it reflects. Healthy vegetation with lots of chlorophyll reflects more near-infrared light and less visible light.

This map shows NDVI anomalies; that is, how the health or “greenness” of vegetation compared to the long-term average. The map compares the past year—July 25, 2020, to July 24, 2021—to the annual average from 2000–2015. Brown areas show where plants were more stressed than normal, and greens indicate vegetation that was healthier than normal.

Southern Madagascar is now in its fourth consecutive year of drought, which has “wiped out harvests and cut off access to food,” according to a United Nations news article. In a typical year, the rainy season lasts from November through March. But recent years have brought below-average rainfall during this period, drying up water used for the irrigation of agriculture. Over the past five years, southern Madagascar has had only one good harvest.

The persistent drought and devastation to farms has left more than a million people in southern Madagascar lacking reliable access to food. The Famine Early Warning Systems Network (FEWS NET) reported that much of the region is currently at crisis level for food insecurity (the third level on a five-level scale). Forecasters expect below-average rainfall from October through the end of 2021, which could elevate some areas, particularly around Ambovombe and Ampanihy, to emergency-level food insecurity (just below famine).

A phenomenon known locally as “tiomena” (red wind) is exacerbating the situation. Migrating sand dunes and windblown sand can blanket farmland, crops, forests, and infrastructure. According to the United Nations, a series of strong dust storms this year left some crops buried under sand.

The lack of rainfall and other environmental factors have taken a toll on the region’s vegetation and agricultural production, leaving many in the region facing severe hunger. 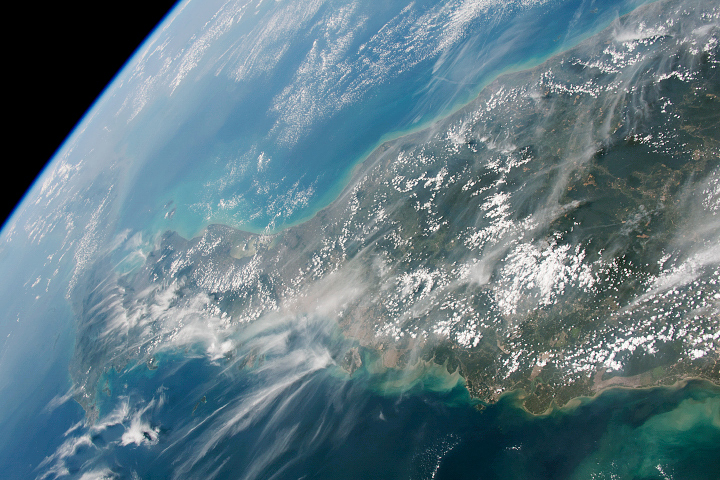 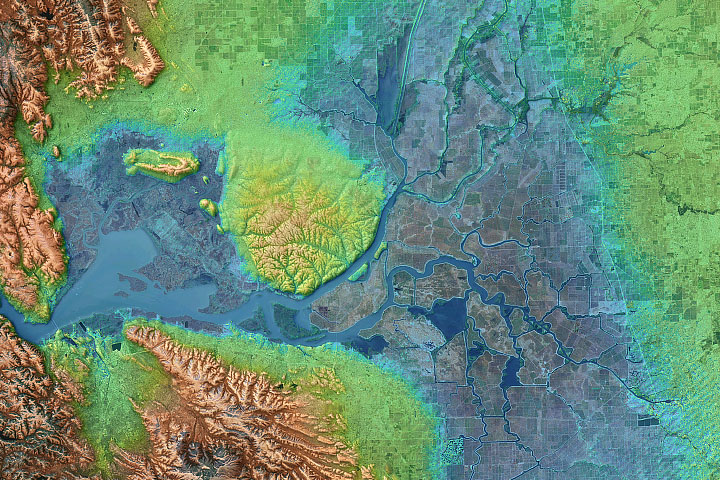 2021 Drought in the Southern Hemisphere

Here’s where prolonged dry spells have parched the land south of the equator.

Drought on the Canadian Prairie

All vegetation—crops and natural vegetation—on Canada’s central prairie was growing less than average, as indicated by the predominant shade of brown in these vegetation index images from July 2009.