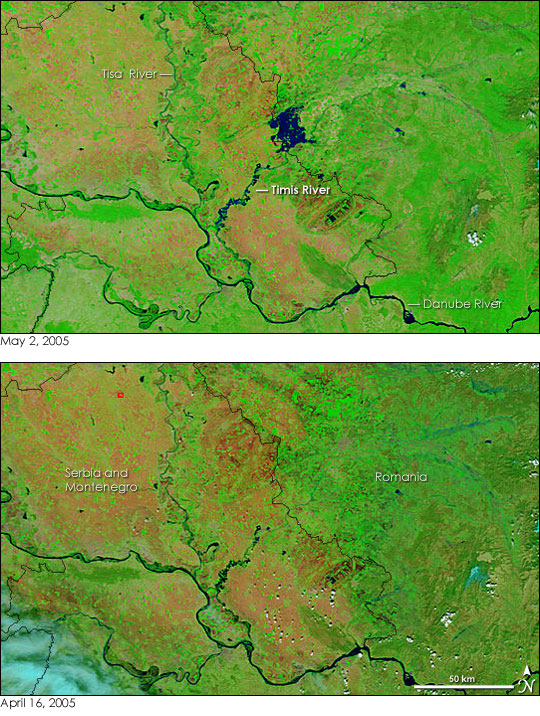 The Timis River burst its banks after heavy rains and melting snow from the Carpathian Mountains inundated Romania and Serbia, forcing thousands from their homes starting on April 20, 2005. By May 2, when the Moderate Resolution Imaging Spectroradiometer (MODIS) captured the top image, the floods had not abated. If anything, the bulge of water that covers over 100,000 hectares of farmland in Romania seems to have grown. This flood was caused in part when a series of dams broke along the river. In the lower image, acquired just over two weeks earlier, the rivers were high with spring run-off, but not severely flooded. In the images, water is dark blue, vegetation is bright green, and bare land ranges from brick red to tan pink.

Romania is calling the flood its worst in 50 years, and Serbia and Montenegro have also been severely affected. The International Federation of Red Cross and Red Crescent reports that 700 houses are completely flooded in Romania. Many of these homes, built of clay bricks, are likely to be destroyed as the water recedes. Across the border in Serbia, water has inundated 900 houses, and more flooding is expected as the flood water is pushed downstream through Serbia and into Montenegro.

The large images provided above have a resolution of 500 meters per pixel. The images are available in additional resolutions.

An unusually harsh winter followed by heavy spring rains has pushed the rivers of Central Europe higher than their typical spring levels.