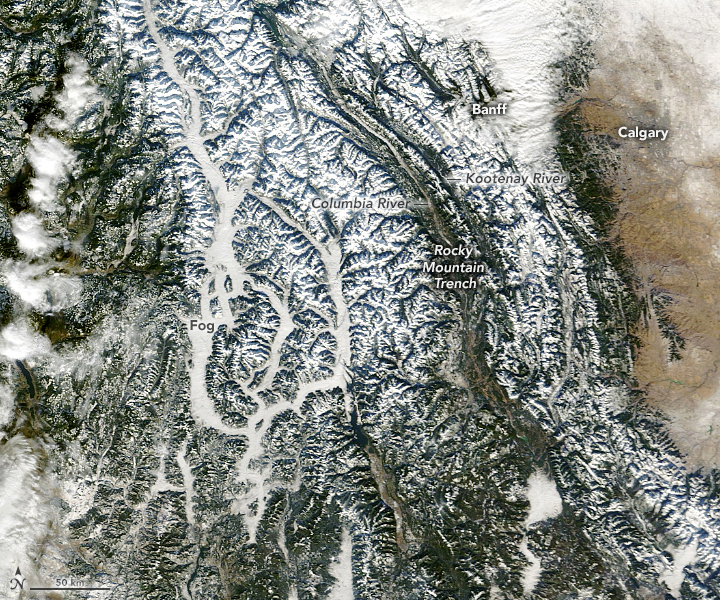 In late autumn 2020, a wide area of the northwestern United States and western Canada bathed in sunlight during a long spell of clear skies. The cloud-free conditions gave satellites an unimpeded view of the landscape, including this image of the snowcapped Rocky Mountains.

The Rockies stretch about 3,000 miles (4800 kilometers) across the western half of North America. This view shows a segment measuring about 400 miles (600 kilometers) long and spanning parts of two Canadian provinces (British Columbia and Alberta) and three U.S. states (Washington, Idaho, and Montana). The image above was acquired on December 3, 2020, with the Moderate Resolution Imaging Spectroradiometer (MODIS) on NASA’s Terra satellite.

The clear skies were the result of a high-pressure weather system that parked over the region during the first week of December. In areas of high pressure, air slowly sinks to lower altitudes and warms, a pattern that inhibits cloud formation.

Not all areas remained cloud free. The animation above, composed with MODIS images from the Terra and Aqua satellites, shows the area once daily from December 1-5. Notice that clouds show up across the mountain valleys—filling in over the Columbia River, the Kootenay River, and along the Rocky Mountain Trench. Some of these clouds could also be fog, in areas where the base of the cloud is close to the ground.

The generally cloud-free skies kickstarted a phenomenon common in late fall and winter known as a temperature inversion. As the name implies, air temperatures become inverted from the normal warmer-to-cooler gradient from the ground to the higher atmosphere. Instead, air becomes colder near the ground than the air aloft. This happens when clear skies, especially at nighttime, allow heat from the Sun-warmed ground to easily escape back to space. The cooler, sometimes shaded ground sitting low in mountain valleys helps to chill the near-surface air, while the air above is still trying to shake the heat.

When moist air near the ground is cooled to its dew point, low-level stratus clouds and fog can form in the valleys. Mountain snow cover can intensify the effect, by reducing daytime warming and by adding extra moisture to the air.

While the inversion layer produces a stunning view from above, it can be hazardous to people on the ground. The phenomenon is associated with light winds and very little mixing of air masses, so sinking air can trap air pollution at low altitudes and cause poor air quality. According to the U.S. National Weather Service, an “air stagnation advisory” was in effect from December 3-5 for parts of northern Montana, Idaho, and Washington.

Clear skies over the Rocky Mountains helped a temperature inversion to form, which in turn led to cloud-filled valleys. 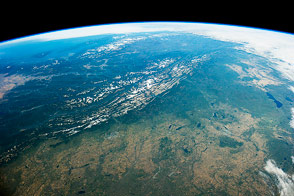 As seen from the International Space Station, a long trench divides the Columbia Mountains and the Canadian Rockies.