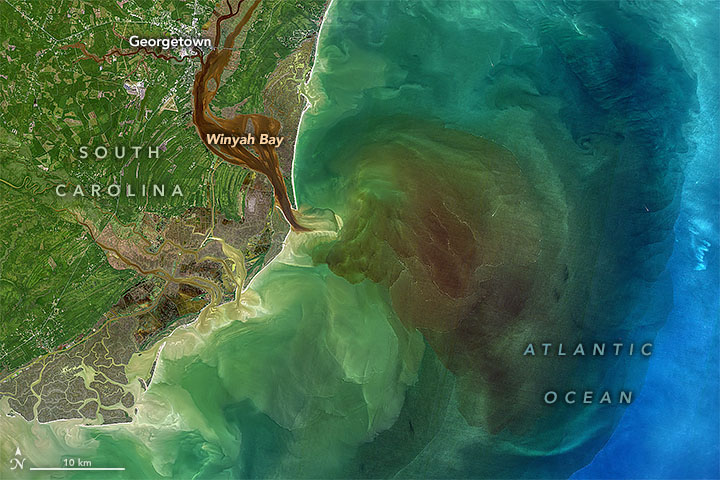 Four blackwater rivers—the Waccamaw, Pee Dee, Black, and Sampit—feed into Winyah Bay, an estuary in eastern South Carolina. All of them flow through swamps, wetlands, and forests that are rich with decaying vegetation and other organic matter. The dead leaves and debris stain the rivers and wetlands a transparent brown color as several natural chemical substances found in plants—tannin, phenol, and humic acid—seep into the water. The same process gives tea its yellow or brown color.

After heavy rains, stained floodwaters can get flushed out of swamps and wetlands into the estuary and ocean. That was happening on October 1, 2020, when the Operational Land Imager (OLI) on Landsat 8 acquired this natural-color image of Winyah Bay. Many waterways were swollen following heavy rains from Hurricane Sally.

Blackwater flows can have important consequences for aquatic ecosystems because they change the color of the light available to phytoplankton for photosynthesis. “The compounds that make up CDOM absorb blue light wavelengths extremely well, so blue light does not penetrate very deep into the water. The red wavelengths are the ones left behind, hence the brownish-red appearance of the water,” explained Tammi Richardson, an oceanographer at the University of South Carolina. “If phytoplankton do not have pigments that can absorb red light, then they will not be able to photosynthesize.”

Since phytoplankton photosynthesis is a centerpiece of the ocean food web, CDOM levels can affect the productivity of the entire Winyah Bay estuary. In practice, cryptophytes and diatoms tend to do well in blackwater, while other types of phytoplankton tend to suffer.

Blackwater holds an interesting place in maritime history in this region. In the early years of European exploration and colonization of North America, mariners sought out blackwater streams to refill their casks because the water was thought to minimize the spread of disease. Sailors did not know why at the time, but the high acidity and presence of certain phenols have anti-bacterial properties.

Among those early sailors may have been the Spanish explorer Lucas Vázquez de Ayllón. He led an expedition of six ships that reached Winyah Bay in August 1526, and established San Miguel de Gualdape, the first European settlement in the contiguous United States. It preceded Pensacola, Roanoke, and Jamestown by decades, but is often overlooked by historians because of how unsuccessful and short-lived it was.

Upon arrival in Winyah Bay, the Spaniards immediately lost their main supply ship—the Capitana—when it ran aground on a sandbar near the modern town of Georgetown. In the chaos that followed, the Native American guides and interpreters they had captured from the area during a previous expedition deserted and slipped into the forest. After about a month in Winyah Bay, Ayllón moved the colony of 500 Europeans and 100 enslaved Africans to a new location. Where exactly they went is unclear, but historians think they settled along Sapelo Sound in what is now Georgia.

However, unusually cold weather, disease, and lack of food quickly turned a difficult situation into a catastrophe for the colonists. Settlers died in large numbers by mid-October, including Ayllón himself. His death triggered a battle for leadership of the struggling colony. In the confusion, the African slaves revolted and escaped, meaning the first ever documented slave uprising in North America happened at San Miguel de Gualdape. The 150 Europeans who were still alive after the uprising soon abandoned the colony and set sail for Hispaniola. The escaped slaves, meanwhile, were likely taken in by Native American communities in the area.

One of the first attempts to set up a permanent European colony in the contiguous United States ended in disaster.