A Slew of September Storms 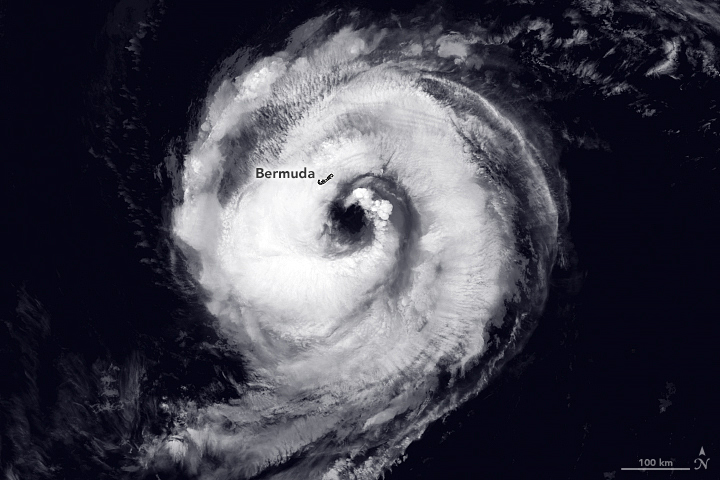 The 2020 Atlantic hurricane season has broken many records so far, and the season is barely half done. More named storms have occurred earlier than ever before in the satellite era. As of September 14, the National Hurricane Center had named twenty storms in just over three months; an average season produces twelve storms in six months.

Five tropical storm systems were swirling in the Atlantic Ocean on September 14, tying the record for the most tropical cyclones observed in the basin at one time. Hurricane season typically peaks from mid-August to late October.

The image above shows the strongest of the five current storms, Hurricane Paulette. On the morning of September 14, the eye of the hurricane passed directly over Bermuda with maximum sustained winds of 150 kilometers (90 miles) per hour. The Visible Infrared Imaging Radiometer Suite (VIIRS) on the Suomi NPP satellite acquired this image of Hurricane Paulette at 2:30 a.m. Atlantic Daylight Time on September 14, 2020, just hours before the storm reached the island. Clouds are shown in infrared using brightness temperature data, which is useful for distinguishing cooler cloud structures from the warmer surface below.

Paulette was expected to bring 7 to 15 centimeters (3-6 inches) of rain, cause coastal flooding, and produce life-threatening rip current and surf condition. The hurricane was predicted to strengthen through September 15 and then gradually weaken as it moves north.

The image below shows Hurricane Sally, which quickly strengthened into a category 1 storm as it approached the U.S. Gulf Coast. The image was acquired around midday on September 14 by the Moderate Resolution Imaging Spectroradiometer (MODIS) on NASA’s Terra satellite. Around the time of the image, Sally had maximum sustained winds of 90 miles (150 kilometers) per hour. 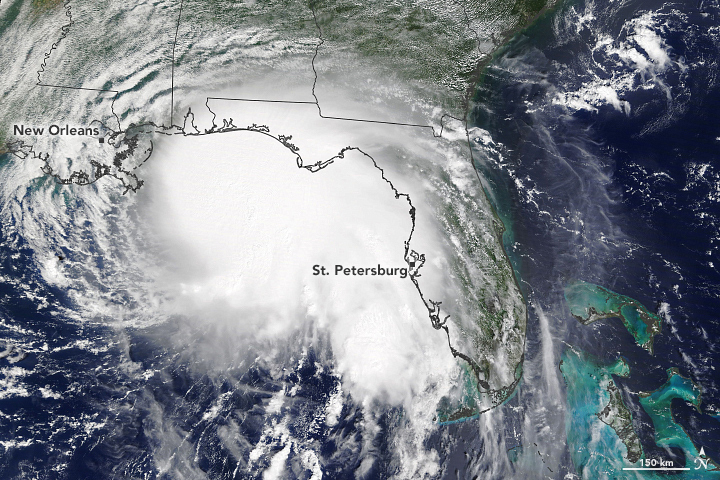 Forecasters are unsure of where Sally will make landfall due to uncertainties about when the hurricane will turn north. However, the storm is expected to produce dangerous storm surges, flooding, and strong winds early this week. Hurricane warnings were issued from southeastern Louisiana to the Alabama-Florida border. Sally is also expected to slow down offshore through September 15, which will prolong the storm’s impacts on the Gulf Coast.

With more than two months of Atlantic hurricane season left, forecasters say the basin will likely see more activity. The National Oceanic and Atmospheric Administration (NOAA) reported a La Niña climate pattern has developed in the equatorial Pacific. La Niña is marked by unusually cold ocean surface temperatures that weaken westerly winds high in the atmosphere. This weakening leads to low vertical wind shear over the Caribbean Sea and Atlantic Basin, enabling storms to develop and strengthen. In August, NOAA’s Climate Prediction Center updated its hurricane forecast to predict as many as 25 named storms could occur this season; as many as six of those could be major hurricanes.

The 2020 Atlantic hurricane season has broken many records so far, and the season still has two months to go.