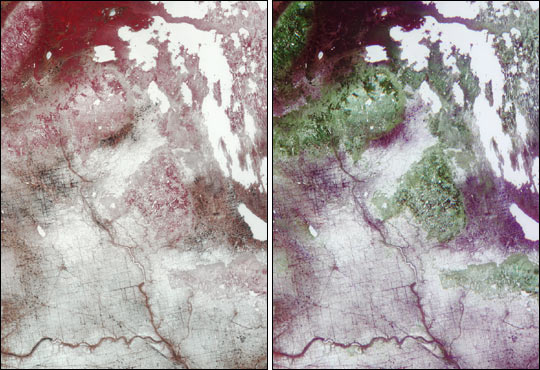 Surface brightness contrasts accentuated by a thin layer of snow enable a network of rivers, roads, and farmland boundaries to stand out clearly in these Multi-angle Imaging Spectroradiometer (MISR) images of southeastern Saskatchewan and southwestern Manitoba. The lefthand image is a multi-spectral false-color view made from the near-infrared, red, and green bands of MISR's vertical-viewing (nadir) camera. The righthand image is a multi-angle false-color view made from the red band data of the 60-degree aftward camera, the nadir camera, and the 60-degree forward camera. In each image, the selected channels are displayed as red, green, and blue, respectively. The data were acquired April 17, 2001, and cover an area measuring about 285 kilometers x 400 kilometers. North is at the top.

The junction of the Assiniboine and Qu'Apelle Rivers in the bottom part of the images is just east of the Saskatchewan-Manitoba border. During the growing season, the rich, fertile soils in this area support numerous fields of wheat, canola, barley, flaxseed, and rye. Beef cattle are raised in fenced pastures. To the north, the terrain becomes more rocky and forested. Many frozen lakes are visible as white patches in the top right. The narrow linear, north-south trending patterns about a third of the way down from the upper right corner are snow-filled depressions alternating with vegetated ridges, most probably carved by glacial flow.

In the lefthand image, vegetation appears in shades of red, owing to its high near-infrared reflectivity. In the righthand image, several forested regions are clearly visible in green hues. Since this is a multi-angle composite, the green arises not from the color of the leaves but from the architecture of the surface cover. Progressing southeastward along the Manitoba Escarpment, the forested areas include the Pasquia Hills, the Porcupine Hills, Duck Mountain Provincial Park, and Riding Mountain National Park. The forests are brighter in the nadir than at the oblique angles, probably because more of the snow-covered surface is visible in the gaps between the trees. In contrast, the valley between the Pasquia and Porcupine Hills near the top of the images appears bright red in the lefthand image (indicating high vegetation abundance) but shows a mauve color in the multi-angle view. This means that it is darker in the nadir than at the oblique angles. Examination of imagery acquired after the snow has melted should establish whether this difference is related to the amount of snow on the surface or is indicative of a different type of vegetation structure.

Saskatchewan and Manitoba are believed to derive their names from the Cree words for the winding and swift-flowing waters of the Saskatchewan River and for a narrows on Lake Manitoba where the roaring sound of wind and water evoked the voice of the Great Spirit. They are two of Canada's Prairie Provinces; Alberta is the third.