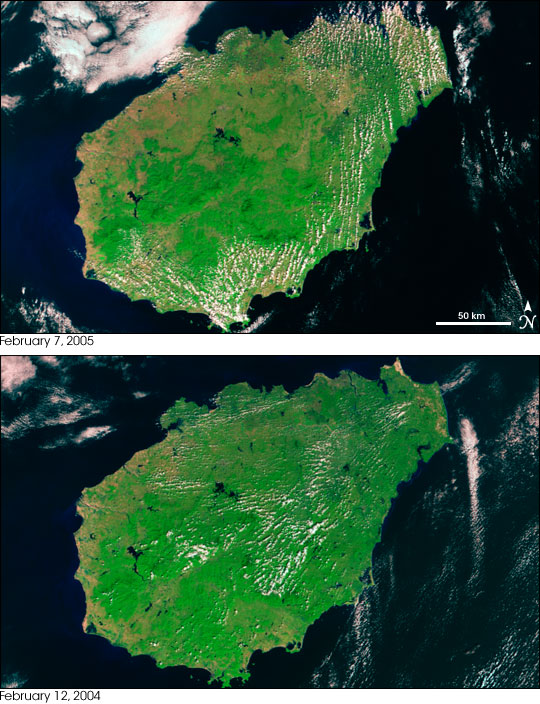 China’s lush island province, Hainan is in the grip of a severe drought, which started in late 2004. Green with sugar and rubber plantations, natural vegetation, and other crops in 2004 (lower image) by February 2005 (top), Hainan is brown and parched. According to media reports, over half of the arable land—approximately 196,200 hectares—is threatened by the dry weather.

Water is in short supply, with reservoirs holding just over 30% of their normal water storage and 64 small and mid-sized rivers dry, leaving about 555,000 of the island’s residents with limited access to drinking water. The government may soon begin to ration water in urban areas. The water shortage is also visible in a comparison of the two above images. Almost without exception, every black body of water on the island is significantly smaller on February 7, 2005 than it was on February 12, 2004.

The drought is affecting nations across Southeast Asia, including parts of Vietnam, Thailand, India, and China, and may be linked to a weak El Niño, which tends to decrease rainfall in these regions. No significant rain is expected in Hainan until May.

The above images were acquired by the Moderate Resolution Imaging Spectroradiometer (MODIS) on NASA’s Terra satellite. The scenes are shown in false color so that plant-covered areas are bright green and bare soil is a pinkish tan.