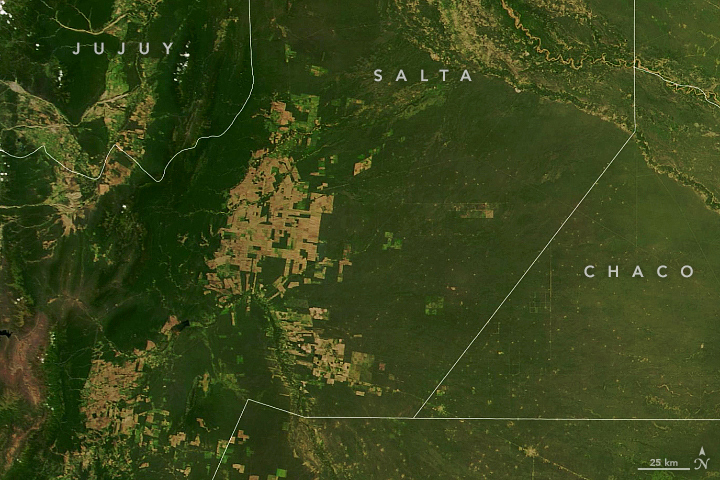 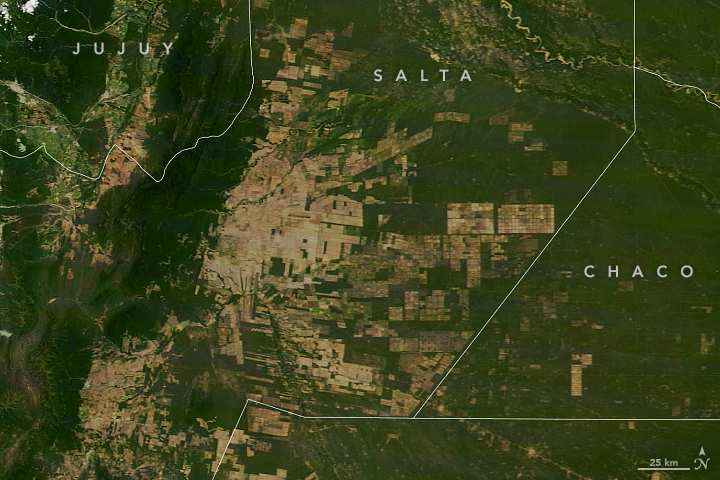 The Gran Chaco spans about 650,000 square kilometers (250,000 square miles) in Argentina, Paraguay, Bolivia, and Brazil—making it the largest dry forest in South America. It largely consists of shrubs and hardwood trees that provide habitat for thousands of plant species and hundreds of animal species. The native Wichí people have hunted and gathered on this land for decades.

The images above show deforestation over a span of two decades around the Salta Province of northern Argentina. The image from December 18, 2000, shows a mix of cleared land and greener areas. The image from December 24, 2019, shows much of the forest replaced by large fields. The images were acquired by the Moderate Resolution Imaging Spectroradiometer (MODIS) on NASA’s Terra satellite.

Much of the cleared land has been converted to farmland for growing soybeans and raising livestock. Argentina is the third-largest soybean producer in the world. Research shows that soybean production was a direct driver of deforestation in the forest in the 2000s. As soybean producers felt more pressure to keep up with global demand, they needed to find untapped land and began clearing forests and arid regions. Advances in technology made it easier to grow crops on these marginal lands, which were previously difficult to cultivate.

Controlling deforestation in Gran Chaco has been challenging. In 2007, Argentina enacted a national “forest law” mandating that local governments regulate the expansion of large-scale farming and establish practices to protect native forests. However, research shows that local governments were unable to enforce the law in certain protected zones, some of which actually experienced an increase in deforestation after the law was passed.