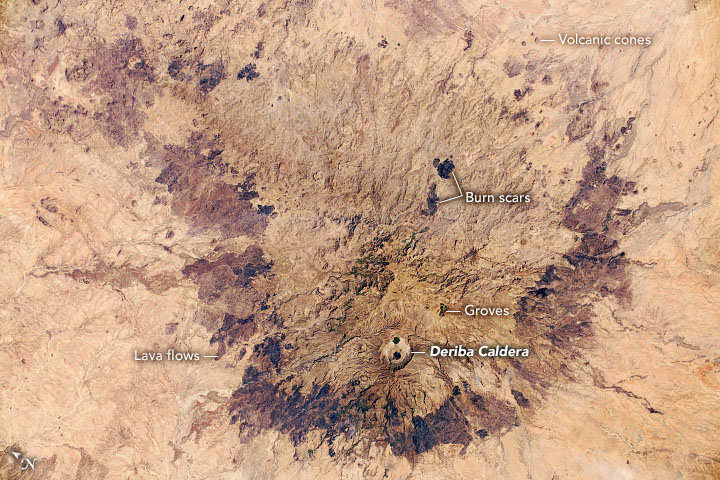 Astronauts aboard the International Space Station (ISS) took this near-vertical photograph of Jebel Marra (also known as the Marrah Mountains) in the eastern Sahara Desert. The almost circular massif in the Darfur region of Sudan is a large cluster of volcanoes and lava flows, with a large central area of volcanic pyroclastic deposits that measures roughly 70 kilometers (40 miles) north to south. Numerous small volcanic cones appear around the margin of the massif.

A collapsed volcano, the Deriba Caldera, is the highest point in Sudan (3042 meters/9,980 feet) and the site of two small lakes. The caldera also drew the interest of astronauts in 2008.

The entire massif rises high enough to have a climate that is cooler and wetter than the surrounding desert. It is thus a center of human population, with numerous small fields and several towns. Seen from space, the evidence of human activity comes in the form of palm groves. The two prominent dark patches at image center are likely fire scars.

Astronaut photograph ISS061-E-152239 was acquired on February 2, 2020, with a Nikon D5 digital camera using a 140 millimeter lens and is provided by the ISS Crew Earth Observations Facility and the Earth Science and Remote Sensing Unit, Johnson Space Center. The image was taken by a member of the Expedition 61 crew. The image has been cropped and enhanced to improve contrast, and lens artifacts have been removed. The International Space Station Program supports the laboratory as part of the ISS National Lab to help astronauts take pictures of Earth that will be of the greatest value to scientists and the public, and to make those images freely available on the Internet. Additional images taken by astronauts and cosmonauts can be viewed at the NASA/JSC Gateway to Astronaut Photography of Earth. Caption by Justin Wilkinson, Texas State University, JETS Contract at NASA-JSC.