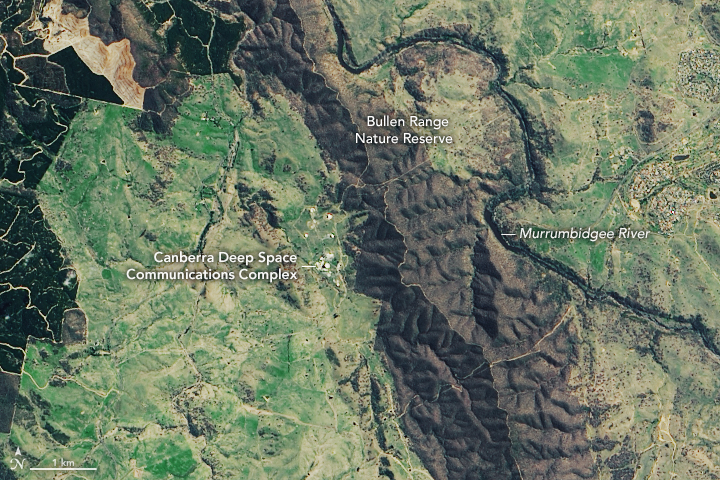 When NASA engineers need to communicate with distant spacecraft, the signal goes out through one of three NASA communication complexes spread around the world. Without the Deep Space Network (DSN), it would not be possible to stay in touch with missions such as Voyager 1—which launched in 1977 and is still sending back signals from interstellar space, some 22 billion kilometers (14 billion miles) away—or the Deep Space Climate Observatory (DSCOVR)—a satellite that takes full-disc images of Earth from 1.6 million kilometers (1 million miles) away.

On February 24, 2020, the Operational Land Imager (OLI) on Landsat 8 acquired a natural-color image (above) of the communications site in Canberra, Australia. 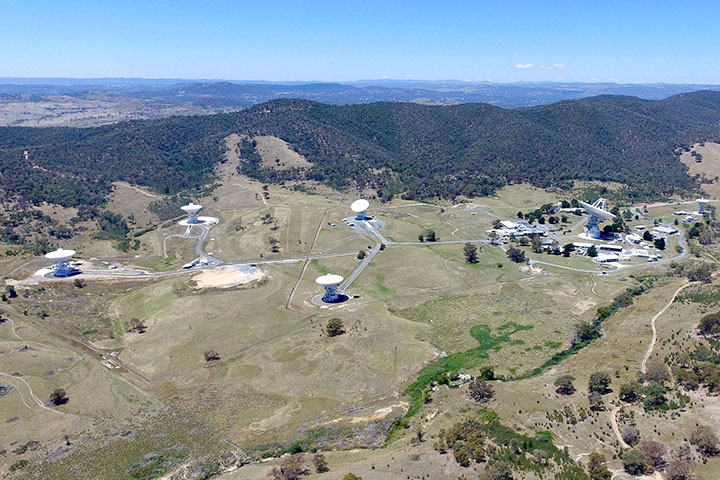 Each of the three DSN complexes has large antennas that are designed to enable daily radio communication between NASA spacecraft and engineers on Earth. Canberra, like the other two facilities, has at least four antennas, each with large, parabolic dishes and sensitive receiving stations. In the Landsat image at the top of the page, the dishes appear as white circles.

The most powerful antenna at the Canberra station is Deep Space Station 43 (below). With a diameter of 70 meters (230 feet), it is the largest steerable parabolic antenna in the Southern Hemisphere. In March 2020, engineers began working on critical upgrades that will reduce the risk of unplanned outages and make the antenna more compatible with future missions, such as the Mars 2020 rover and other Moon and Mars missions.

The other two DSN sites are in Goldstone, California, and near Madrid, Spain, putting the three stations about 120 degrees apart. The strategic placement allows for continuous communication with spacecraft even as Earth rotates. Together, the three stations make the Deep Space Network the largest and most sensitive scientific telecommunications system in the world.

NASA’s first station was established in Goldstone, California, in 1958. When it came time to build the second station, the agency chose the Tidbinbilla Valley, 35 kilometers (22 miles) southwest of Canberra, due to its proximity to the city and the fact that the surrounding ridges help shield the site from unwanted radio interference. Construction of the complex began in June 1963, with communication operations beginning in December 1964, in time to support the Mariner 4 encounter with Mars.