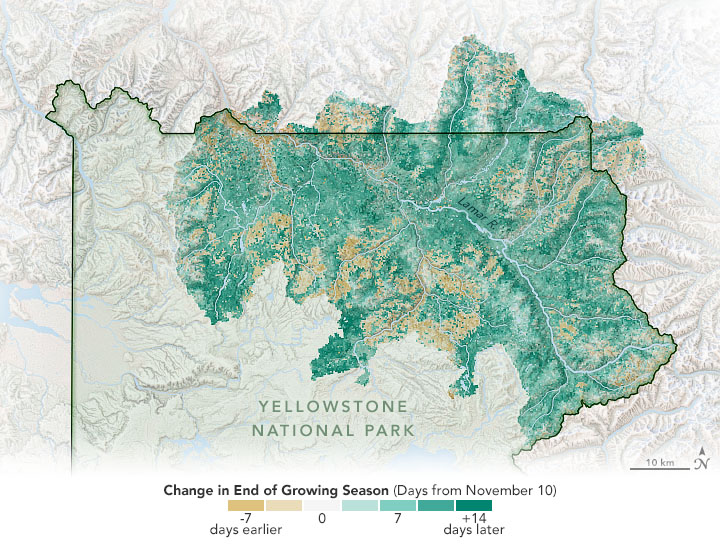 Over the past few decades, the bison population in Yellowstone National Park has grown substantially. Some of that is due to longstanding conservation efforts, but some of it is also due to a greater abundance of food for the animals to graze on. A new study by a NASA scientist has found a link between the effects of climate change, the productivity of grasslands, and the proliferation of bison in Yellowstone.

Using 20 years of data from NASA’s Aqua and Terra satellites, earth scientist Christopher Potter examined the length of the growing season in Yellowstone—from snowmelt in springtime to the first snowfall in autumn—and the health and abundance of vegetation during that time. He found that the annual period of vegetation growth has been getting longer, likely due to the decreasing severity of winters and warming average temperatures (year-round) as a result of climate change.

The map above depicts one aspect of that change: how the end of the growing season fluctuated around Yellowstone National Park between 2001 and 2017. The map is based on measurements of vegetation greenness (the Normalized Difference Vegetation Index) as observed by the Moderate Resolution Imaging Spectroradiometer (MODIS) instruments on Terra and Aqua.

The National Park Service first approached NASA about ten years ago for insight into patterns of growth across Yellowstone’s grasslands. They thought tracking such growth could provide wildlife managers with clues about where bison and other animals might move. Potter became part of that effort.

As the new research shows, the grass-growing season is getting longer and bison have more opportunities to feed, likely fueling their population growth. But as they follow the development of new and better grazing spots, they become more likely to leave the protected areas of the park. This creates challenges for the Park Service because bison can carry brucellosis, a bacterial disease that can spread among other wild species and domesticated livestock. Getting regular updates on grassland growth patterns can help wildlife managers better predict the movements of the bison herds.

Scientists also see national parks as natural laboratories for climate research because land use is restricted, so the fingerprints of climate change are easier to detect than in settled areas. A decade ago, there was enough satellite data to make some projections about vegetation growth and animal movements, but not enough to draw conclusions about climate effects. Now the 20-year record allows for deeper insights about Yellowstone.

MODIS instruments acquire images across nearly the entire surface of Earth every day. For his study, Potter compiled cloud-free images of Yellowstone across 20 years and also developed tools to make maps of vegetation and snow cover. Wildlife managers can check such maps to anticipate where and when confrontations between bison and human communities are likely to happen and to prepare appropriate conservation actions at the park boundaries.

“By compiling daily satellite data, we created a near-real-time online tool that resource managers can consult much like a weather map,” said Potter, who is based at NASA’s Ames Research Center. “MODIS is the silver bullet for these large-scale wilderness situations, where daily updates make all the difference in planning a response.”