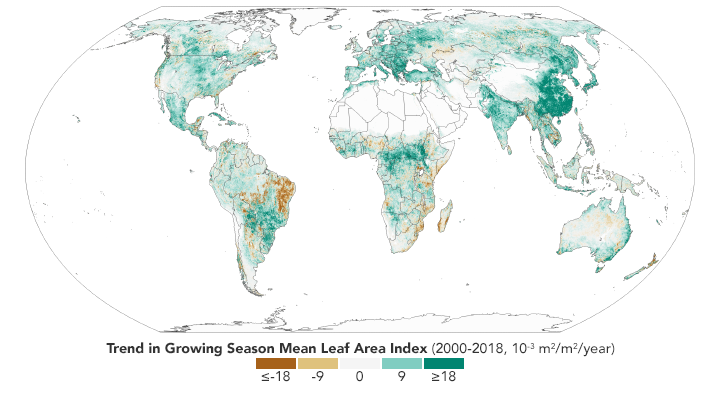 Scientists previously established that the world is greener than it was in the early 1980s. Updated maps show that the trend has continued, and researchers say reduced global warming is among the consequences.

The map above shows where greenness increased (green) and decreased (brown) across the planet between 2000 and 2018. Specifically, it shows the trend in the “leaf area index”—the amount of leaf area relative to ground area—during the growing season. The index is computed using data from the Moderate Resolution Imaging Spectroradiometer (MODIS) on NASA’s Terra and Aqua satellites. White areas are where the land is barren, built upon, or covered with ice, wetlands, or water.

Note that the map does not show overall greenness, which is why it does not exactly match heavily forested areas like the Amazon or the Congo Basin. Instead, the map shows how greenness has changed —a phenomenon most obvious in places like China and India where agriculture has intensified and governments have made efforts to conserve and expand forests.

There is a clear greening trend in boreal and Arctic regions, a result of rising temperatures. For example, Svalbard in the high-Arctic has seen a 30 percent increase in greenness, according to Rama Nemani of NASA’s Ames Research Center, a co-author of the review paper in Nature Reviews Earth & Environment. The greening was concurrent with an increase in mean summer temperature from 2.9° to 4.7° Celsius (37.2° to 40.5° Fahrenheit) between 1986 and 2015. 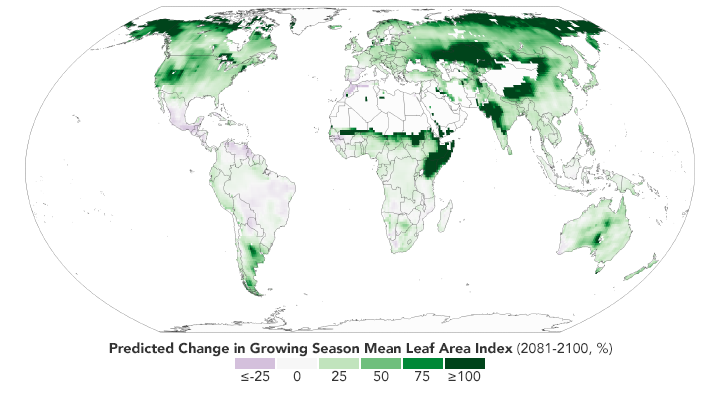 The paper’s authors reviewed more than 250 published articles that have used satellite data, modeling, and field observations, to understand the causes and consequences of global greening. Among the key results, the authors noted that on a global scale greening can be attributed to the increase of carbon dioxide in the atmosphere. Rising levels of carbon dioxide increase the rate of photosynthesis and growth in plants.

There is an interesting consequence of this global green up: as vegetation consumes some of the heat-trapping carbon dioxide it also performs evapotranspiration—a function similar to human sweating—which can have a cooling effect on the air. Scientists say that global greening since the early 1980s may have reduced global warming by as much as 0.2° to 0.25° Celsius (0.36° to 0.45° Fahrenheit). In other words, the world would be even warmer than it is if not for the surge in plant growth.

“It is ironic that the very same carbon emissions responsible for harmful changes to climate are also fertilizing plant growth,” said co-author Jarle Bjerke of the Norwegian Institute for Nature Research, “which in turn is somewhat moderating global warming.”

According to climate models, the future looks even greener. The second map shows what the green-up might look like in the future based on the Coupled Model Intercomparison Project (CMIP5) climate model, under a scenario in which increases in greenhouse gases lead to almost 5° Celsius (9° Fahrenheit) of warming by the end of the 21st century. Specifically, it shows the predicted change in the growing season’s “leaf area index” from 2081-2100 relative to 1981-2000. The chart below the map shows the predicted changes by latitude. Notice that high latitudes in the Northern Hemisphere are still expected to change the most.

“This greening and associated cooling is beneficial,” said Shilong Piao of Peking University, and lead author of the paper. “But reducing carbon emissions is still needed in order to sustain the habitability of our planet.” 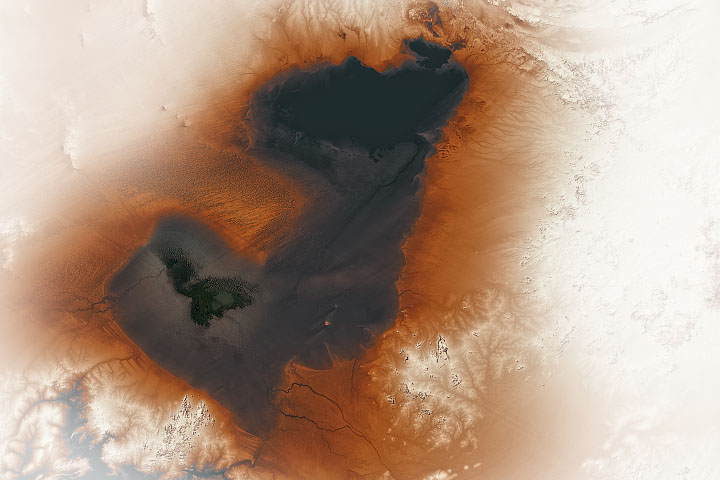