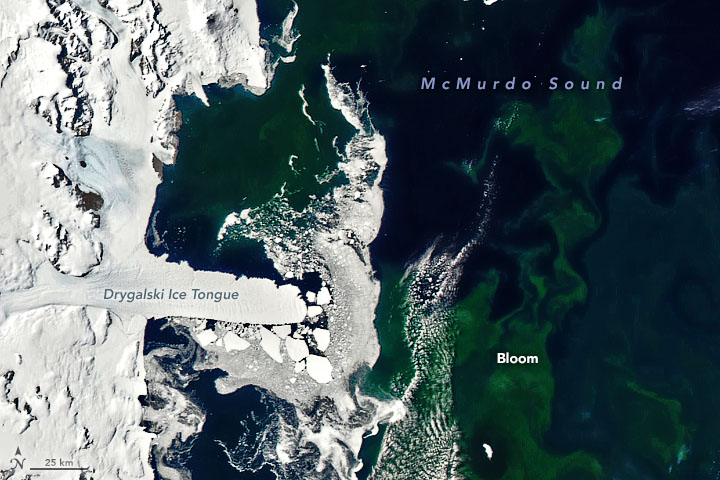 There is plenty of plant-like life around Antarctica; you just have to know when and where to look. During the austral spring and summer, coastal waters sometimes swirl with vibrant green color—the surface expression of a huge phytoplankton bloom.

The floating, microscopic plant-like organisms were abundant in Terra Nova Bay and McMurdo Sound on January 21, 2020, when the Moderate Resolution Imaging Spectroradiometer (MODIS) on NASA’s Aqua satellite acquired this image. Such colorful swirls in coastal waters are sometimes caused by sediments stirred up by waves and currents. But scientists say the source of the color this month has a biological origin.

“It is definitely a phytoplankton bloom,” said Kevin Arrigo, a biological oceanographer at Stanford University. “They tend to form every year in Terra Nova Bay around January.” Robert Dunbar, a fellow researcher at Stanford, agrees that the color is a phytoplankton bloom. “These kinds of features are common in Antarctica’s coastal polynyas in summer and late summer.” 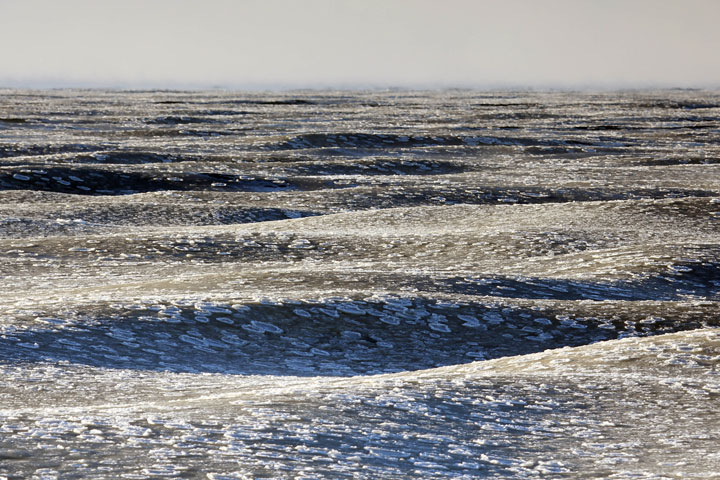 Polynyas are areas where winds sustain a persistent opening in the sea ice. Sunlight and near-surface nutrients are plentiful in these areas, making them havens for phytoplankton. Blooms can even occur in polynyas in late summer when the water is covered by thin, new frazil crystals and pancake ice. Research by Dunbar and colleagues has shown that late summer blooms can accumulate in this ice and turn it green. The phenomenon—most widespread in February and March—is visible in the photograph above, shot by Dunbar in 2018.

Even in the satellite image from late January 2020, some of the bloom appears be associated with the sea ice, primarily north of the Drygalski ice tongue. Still, a significant amount of the bloom shows up farther out in McMurdo Sound and could just be a typical summer bloom.