Making a Connection in the Kingdom of Tonga 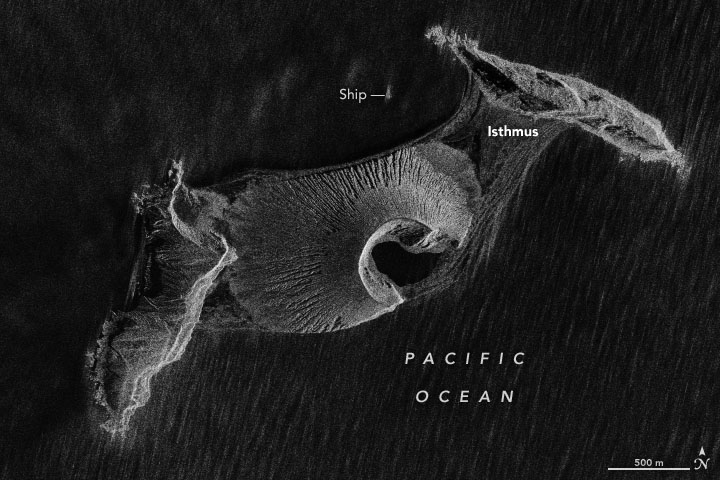 The recently formed volcanic island unofficially known as Hunga Tonga-Hunga Ha‘apai was not expected to survive the erosive and relentless lashing of the sea. But against the odds, the landmass that exploded and oozed into existence in early 2015 is now nearly five years old, and still standing.

Researchers have used that time to build a case study on the rarely observed process of an island growing from an undersea volcano and subsequently decaying in Earth’s erosive environment. Islands formed by these surtseyan-type eruptions are typically hard to observe, given that they occur in remote oceanic locations and erode away before they are spotted in most instances. In fact, Hunga Tonga-Hunga Ha‘apai—which formed after an undersea eruption that began in December 2014 in the Tongan archipelago—is the first such island to be intensively studied by satellites during its early lifetime.

Radar imaging satellites are one way that NASA scientists Jim Garvin and Dan Slayback are studying the island’s evolution at new time scales. Synthetic aperture radar (SAR) provides high-resolution imaging data day or night, when skies are cloudy or clear; that’s particularly important in a cloudy tropical location like the Tonga archipelago. The SAR image above was acquired on October 8, 2019, by the Canadian Space Agency’s RADARSAT-2. (Data are copyright Maxar Technologies Ltd., 2019.)

Notice that the image is not a nadir (straight down) view. Since the eruption, scientists have acquired two different-angled radar images of the island almost every 24 days. By combining images from different angles, scientists can detect differences in elevation and “texture,” which has been advantageous for understanding how the island is changing.

Prior to the eruption, two small islands sat isolated in the South Pacific Ocean nearby. Hunga Tonga was the strip of land now visible at the island’s northeast side, with Hunga Ha’apai to the west (both tips of a 5-kilometer-wide submarine caldera nearly 2 kilometers under the ocean). When the steam, ash, and clouds cleared from the 2014-15 eruption, a new landscape had filled the gap, standing more than 120 meters over the surrounding terrain.

Throughout 2015, the redistribution and hydrothermal alteration of volcanic material helped stabilize the new island. After erosion opened the crater lake to the ocean, a sandbar formed shortly thereafter, closing it off and protecting it from direct ocean wave action. At the same time, redistribution of eroded ash and sediment created and then substantially widened the isthmus to Hunga Tonga to the northeast. These processes are harbingers of the new island’s “toughness.” 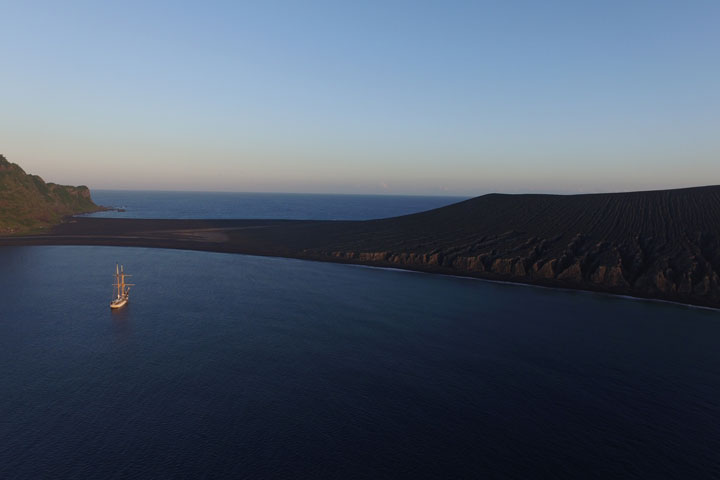 But there’s something visible in this radar image that wasn’t there in 2015. The smudge of white just north of the island is the Sea Education Association’s sailing ship SSV Robert C. Seamans. The vessel carried 40 people, including Slayback, to the island for a first-hand look. The photograph above, acquired via drone by Captain Chris Nolan, shows the ship anchored near the island during sunset in October 2019.

The visit marks the second year that Slayback joined crew and students on a Sea Education Association (SEA) Semester South Pacific cruise in support of ongoing NASA Earth science research. Writing in a blog about the expedition, Slayback noted: “We made many useful observations, collected some good data, and gained a more practical human-scale understanding of the topography of the place (such as that the adjacent pre-existing islands, and their rocky shorelines, are almost fortress-like in their inaccessibility). We also saw things not accessible from space, such as the hundreds of nesting sooty terns, and details of the emergent vegetation.”

Garvin and Slayback believe that the satellite- and land-based insight into landscape processes on the island could be useful for understanding similar processes on ancient Mars. “Using the Earth to understand Mars is of course something we do,” Garvin said, noting the similarities in erosion on the island and scars left by ancient eruptions through shallow seas on Mars. “Mars may not have a place exactly like this, but still, it bespeaks the planet’s history of persistent water.”

Furthermore, extensive fields of small volcanoes that appear similar to this one in Tonga have been mapped by NASA’s Mars Reconnaissance Orbiter (MRO). Such cones may have erupted into shallow, persistent seas that once covered regions on Mars, producing landscapes that may reflect the depth and wave-action of such surface waters on the Red Planet.

Against the odds, the landmass that exploded and oozed into existence in early 2015 is now nearly five years old.