Lake Mead by the Seasons 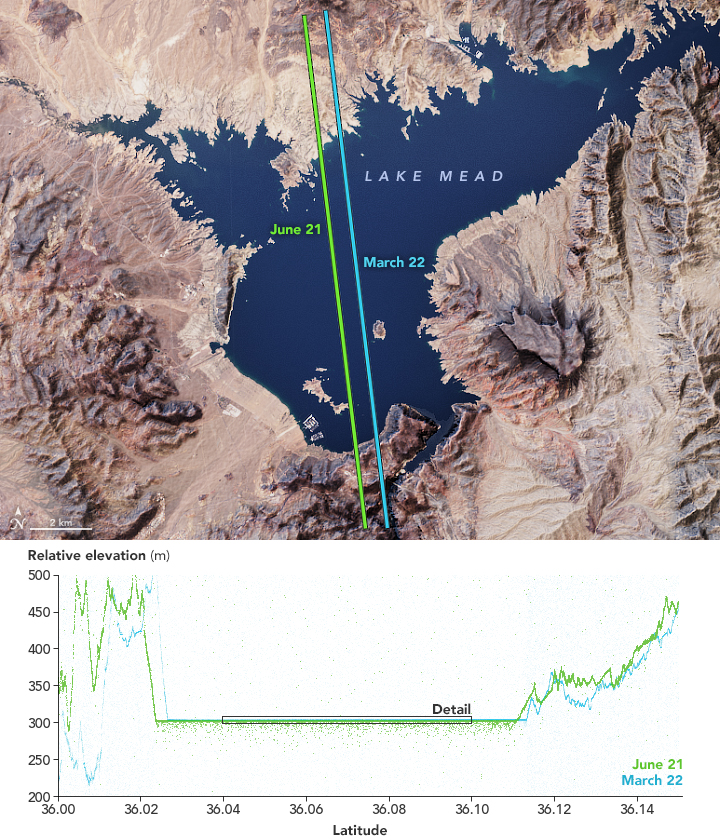 Lake Mead, a reservoir along the Colorado River at the Arizona-Nevada border, can hold more water than any other reservoir in the United States. Full capacity, however, hasn’t been seen since 1983 due to drought and significant water usage. The decline is not constant: behind the Hoover Dam, water levels rise and fall with the seasons each year.

The seasonal change is visible in these elevation measurements acquired during two passes over Lake Mead by the Advanced Topographic Laser Altimeter System (ATLAS) on NASA’s Ice, Cloud, and land Elevation Satellite-2 (ICESat-2). The first pass (blue) measured the lake’s relative elevation on March 22, 2019, two days after the spring equinox. The second pass (green) measured the elevation on the summer solstice, June 21, 2019.

For reference, the satellite’s parallel passes—about a half-mile apart—are shown over a natural-color image of the lake acquired by the Landsat 8 satellite. That image is overlaid on topography data from NASA’s Shuttle Radar Topography Mission (SRTM) to emphasize the terrain.

ATLAS measures elevation by sending pulses of light from the satellite to Earth’s surface. It then measures, to within a billionth of a second, how long it takes individual photons to return to the sensor. Each dot on the visualization above represents a photon detected by ATLAS. Most of the dots are clustered around the surface of the reservoir. Some penetrate the water—more in June, possibly due to smoother water that day. (Rough, wavy water scatters more photons, making it harder to penetrate the surface.)

Notice that the lake’s surface elevation is quite a bit higher in spring. Most of the reservoir’s water comes from snowmelt from the Rocky Mountains, which in 2019 had an above average snow pack. Lake levels usually start to drop in late spring and early summer as water is drawn out for use by farms and cities in the American Southwest.

The change matches well with ground-based measurements from the U.S. Bureau of Reclamation (USBR), which manages Lake Mead. Their data show that the lake’s water level dropped 5.53 feet (1.69 meters) between March and June. Still, June 2019 levels were the highest of any June since 2010.

Despite the high snow pack and runoff in 2019, the USBR warned that the system of reservoirs in the Colorado River Basin is still strained and continues to be affected by a 20-year drought. The system’s reservoirs—of which Lake Mead and Lake Powell are the largest—are an important source of water for about 40 million people and 5.5 million acres of farmland across the U.S. West and Mexico.

ICESat-2 repeats its orbits every 91 days, making it useful for observing seasonal changes. The satellite was launched in September 2018, and as it accumulates more data over the years, annual patterns will begin to emerge. That’s particularly important for places that are more remote or not monitored from the ground.

According to Lori Magruder, a research scientist at the University of Texas and the ICESat-2 science team lead: “Being able to quantify lake levels is huge in terms of tracking our planet’s water storage and monitoring how the change might fluctuate from year to year due to climate dynamics.”

In this reservoir along the Colorado River at the Arizona-Nevada border, water levels rise and fall with the seasons each year.