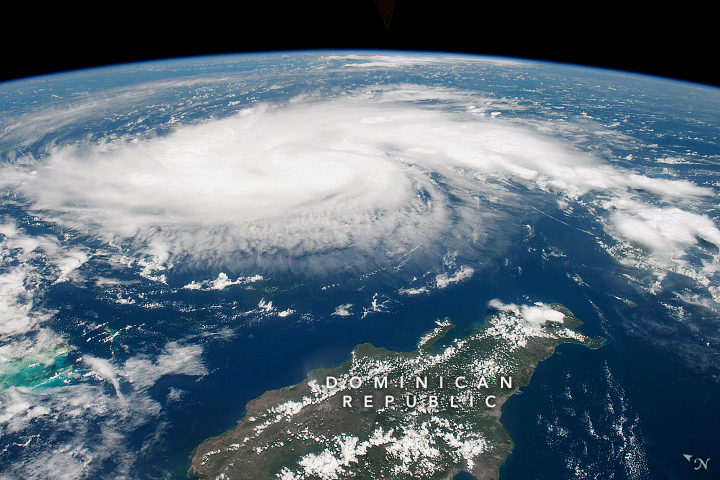 Heading into the Labor Day holiday weekend in United States, citizens and government officials braced for a potent hurricane that has been intensifying in the tropical Atlantic Ocean. By the afternoon of August 30, 2019, Hurricane Dorian had reached category 3 intensity and was headed for the northern Bahamas and the east coast of Florida as a major hurricane, the first of the 2019 Atlantic season.

The photograph above was shot by an astronaut on the International Space Station at 11:12 a.m. Atlantic Standard Time (17:12 Universal Time) on August 29, 2019. At that time Dorian had maximum sustained winds of 85 miles (135 kilometers) per hour and a central pressure of 986 millibars, according to the National Hurricane Center. As of 2 p.m. AST (18:00 UT) on August 30, the center of the storm was about 445 miles (715 kilometers) east of the northwestern Bahamas and 625 miles (1005 kilometers) east of West Palm Beach, Florida. Sustained winds were measured at 115 mph (185 kmph) and the minimum central pressure was 970 millibars. 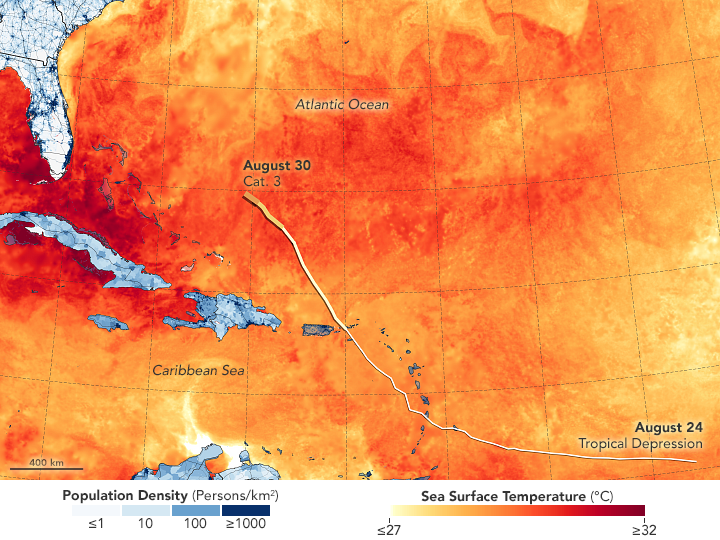 A key factor in the development of a hurricane is the warmth of the ocean surface. Warm water is the fuel that leads a storm to intensify, as heat and moisture move from the ocean to the atmosphere. This map above shows sea surface temperatures (SSTs) in the western Atlantic as of August 28, as well as population density in the U.S. Southeast and several Caribbean islands. Meteorologists generally agree that SSTs should be above 27.8°Celsius (82°Fahrenheit) to sustain and intensify hurricanes (although there are some exceptions).

The data for the map come from the MUR Global Foundation Sea Surface Temperature Analysis, produced at NASA’s Jet Propulsion Laboratory. It is based on observations from several satellite instruments, including the NASA Advanced Microwave Scanning Radiometer-EOS (AMSRE), the Moderate Resolution Imaging Spectroradiometer (MODIS) on the NASA Aqua and Terra platforms, the U.S. Navy microwave WindSat radiometer, the Advanced Very High Resolution Radiometer (AVHRR) on several NOAA satellites, and on in situ SST observations from NOAA. Population data come from the Socioeconomic Data and Applications Center (SEDAC).

NASA Earth Observatory images by Joshua Stevens and Lauren Dauphin, using MUR Global Foundation Sea Surface Temperature Analysis data from the Physical Oceanography Distributed Active Archive Center (PODAAC) at NASA/JPL, and population data from the Socioeconomic Data and Applications Center (SEDAC). Astronaut photograph ISS060-E-47508 was acquired on August 29, 2019, with a Nikon D5 digital camera using a 28 millimeter lens and is provided by the ISS Crew Earth Observations Facility and the Earth Science and Remote Sensing Unit, Johnson Space Center. The image was taken by a member of the Expedition 60 crew. The image has been cropped and enhanced to improve contrast, and lens artifacts have been removed. Story by Michael Carlowicz.

Heading into Labor Day weekend, citizens and government officials braced for a potent hurricane that has been intensifying in the tropical Atlantic Ocean. 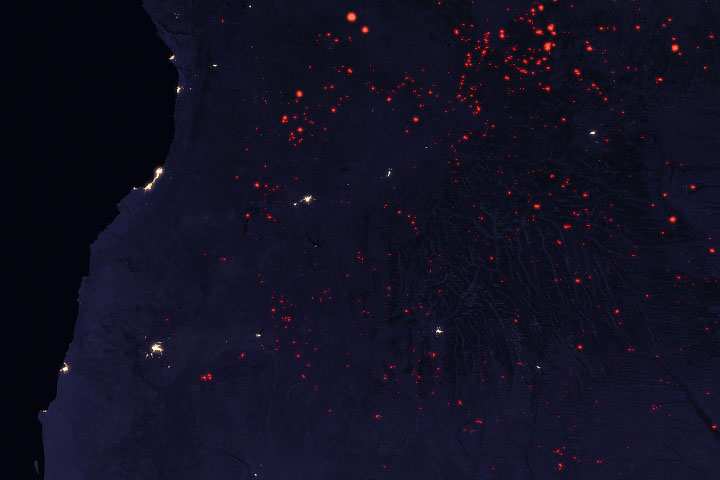