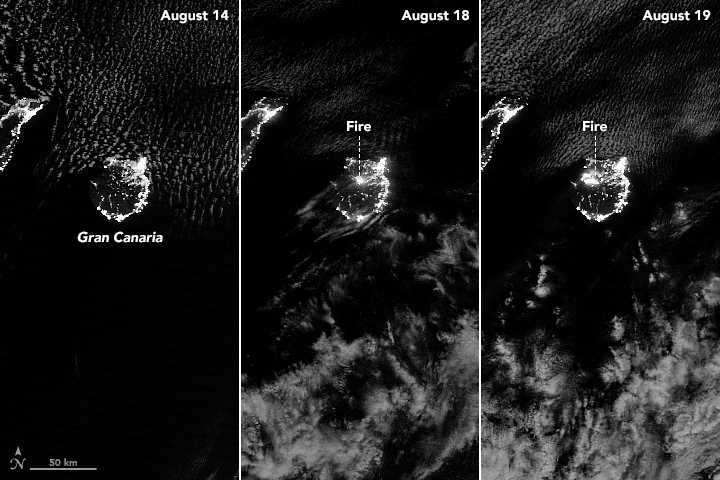 Beginning on August 10, 2019, NASA satellites have observed waves of fire sweeping through forests on Gran Canaria, the second most populous of the Canary Islands. Though the fire has not yet struck major residential and tourist areas, authorities have issued evacuation orders for 9,000 people living in 50 nearby towns and villages.

The Visible Infrared Imaging Radiometer Suite (VIIRS) on the Suomi NPP satellite tracked the growth of the fire between August 14-19, 2019. The VIIRS “day-night band” is extremely sensitive to low light, making it possible to see the fire front from space at night. Nighttime lights from population centers along Gran Canaria’s coast are also visible, particularly along the eastern half of the island.

The fire initially flared up near Tejeda, in the mountainous central part of the island, and then spread rapidly toward the northwest into Tamadaba Natural Park in unusually warm, dry, and windy conditions. The map below shows land surface temperatures on the afternoon of August 15, a day when temperatures exceeded 49°C (120°F) in some areas. The map is based on data collected by the Moderate Resolution Imaging Spectroradiometer (MODIS) on NASA’s Aqua satellite. 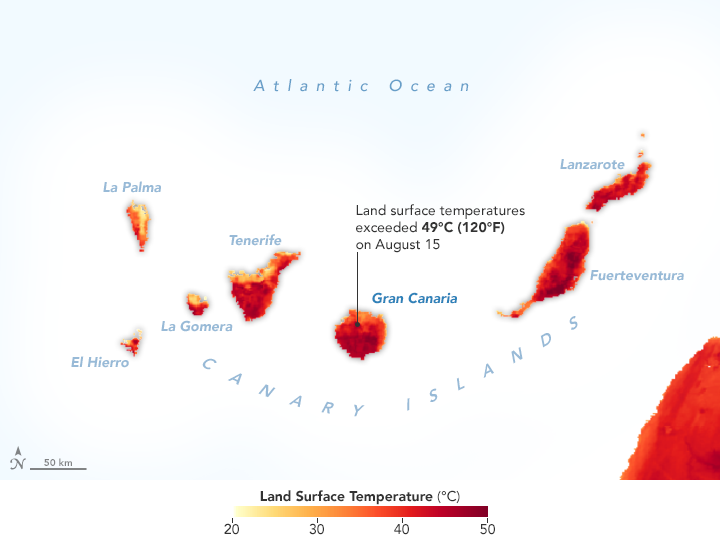 MODIS acquired the false-color image below on August 19. It is composed from a combination of visible and infrared light (MODIS bands 7-2-1) that help distinguish charred vegetation (black) from unburned vegetation (green). Areas with minimal vegetation appear brown.

The fire is burning forests of Canary pine (Pinus canariensis), which is among the most fire-tolerant pine species in the world. The trees have several adaptations that allow them to survive and thrive after fires: thick bark that prevents heat damage, trunks that easily sprout new branches; and serotinous cones that depend on high heat to release seeds. 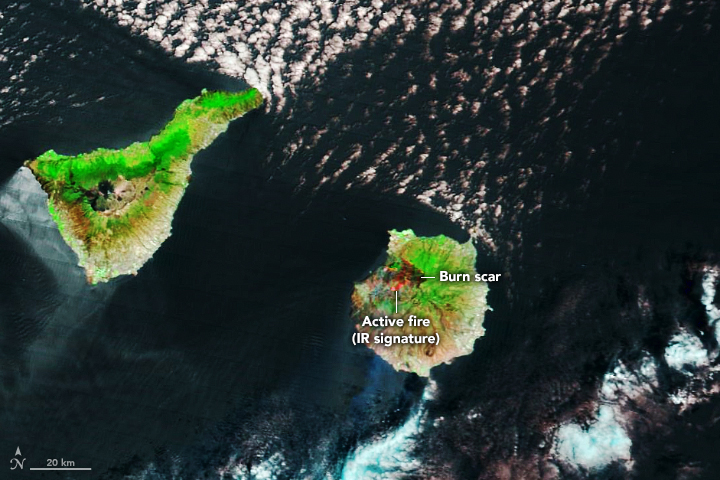 Scientists who monitor fire activity in the Canary Islands have observed clear trends in the past half-century. Most notably, the number of fires has decreased even as the number of hectares burned by each fire has increased significantly. On net, fires burn roughly the same average area each year, but they do it in a much more dramatic fashion because they are larger and more intense.

While increasing temperatures may have contributed to this trend, University of La Laguna scientist José Ramón Arévalo attributes much of the change to more active and effective firefighting efforts that now suppress most fires and lead to a build-up of flammable material in forests. Increased development and tourism also contribute by requiring that firefighters aggressively suppress fires over a wider area.