Contrails Over the Gulf of California 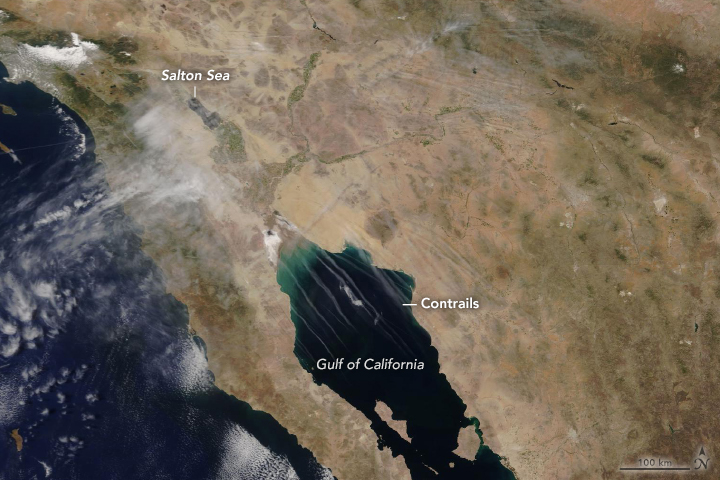 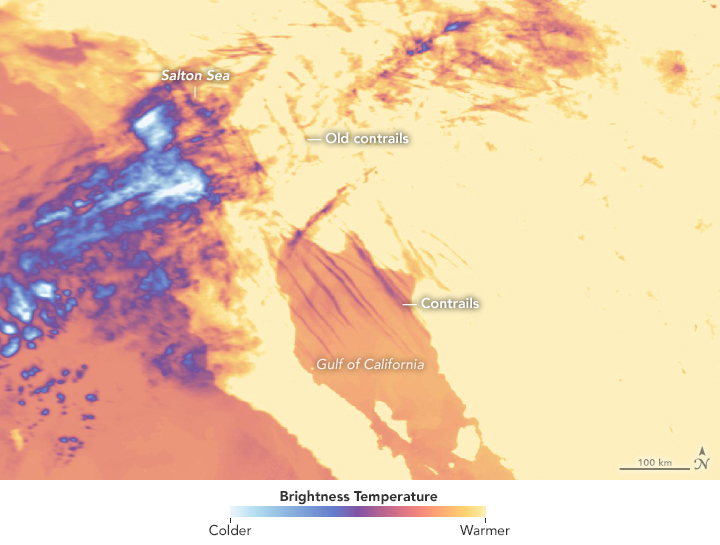 The numerous types of clouds that grow and move around Earth are constantly shaped by the atmosphere, land, and ocean. They can even be shaped by human activity.

Condensation trails, or contrails, are a type of cloud that forms in nearly the same way as naturally occurring cirrus clouds. At high altitudes, where it’s cold enough—at least -39°C (-38°F)—water vapor can easily freeze onto small particles in the atmosphere and form clouds. When the phenomenon involves particles from the exhaust of aircraft, the resulting long, narrow cloud is categorized as a contrail.

Atmospheric conditions were favorable for contrail formation over California and Mexico on the morning of May 5, 2019, when the Moderate Resolution Imaging Spectroradiometer (MODIS) on NASA’s Terra satellite acquired this natural-color image (left).

The corridor between the United States and Mexico is a fairly busy one for air traffic—heavy enough to produce plenty of contrails, but not so much that they all blend together. The parallel formation is likely due to planes following similar flight paths separated by a few minutes, explained Patrick Minnis, an atmospheric scientist at NASA’s Langley Research Center. “Upper level winds move the contrails westward between each passing flight,” he said.

Notice that contrails over the Gulf of California are clearly visible, while those over land are less obvious. Scientists have been working to better quantify the total amount of contrails produced, including those that are harder to detect.

“Contrails are one way that people are directly impacting the atmosphere and climate,” said David Duda, a NASA Langley scientist and co-author of a recent paper on contrails. “Our study tries to quantify how many such contrails are produced so that we can estimate how much they may be contributing to climate change. Air traffic has been increasing over the last several decades; therefore, their effect on climate is also increasing.”

The right image shows the same area in the thermal infrared (Terra MODIS band 31) on the same day and time. Viewed from this perspective, you can more easily see remnants of older contrails, which in this image are particularly dense east of the Salton Sea.

Existing automated techniques are good at locating distinct, straight contrails, but have had a harder time with contrails that have aged, spread out, and become distorted by wind shear. Duda, Minnis, and colleagues used images like this to detect contrails more clearly by day and night and to develop a new technique for estimating how many non-linear contrails may be in the atmosphere.

“The new method searches for clouds nearby that have similar physical properties to the detected contrails but not to other clouds,” Duda said. He notes that these less-distinct contrails could account for the majority of cloud coverage from contrails—three to four times more than that of currently detectable contrails.

The corridor between the United States and Mexico is a fairly busy one for air traffic—heavy enough to produce plenty of contrails, but not so much that they all blend together. 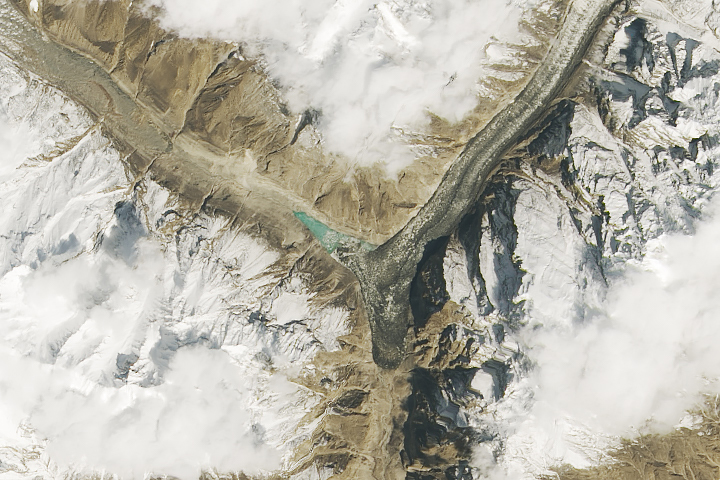