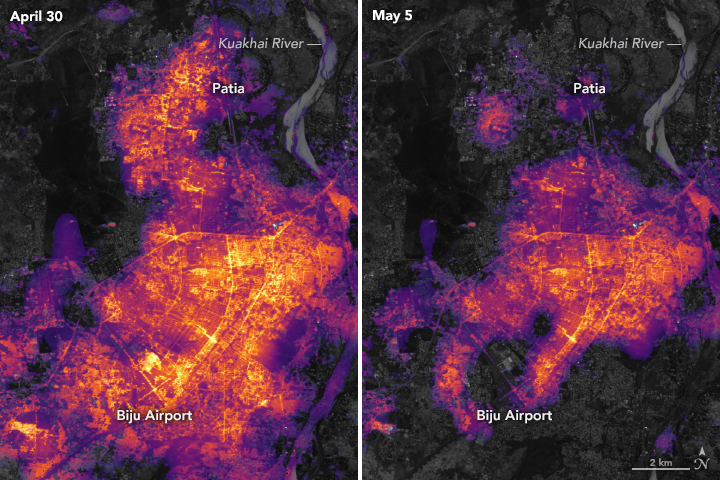 In early May 2019, Tropical Cyclone Fani tore through the state of Odisha in eastern India as one of the worst storms to hit the country since 1999. The cyclone brought winds of more than 200 kilometers (120 miles) per hour when it made landfall on the morning of May 3. The storm caused several deaths and left millions of people homeless in the cities of Puri, Bhubaneswar, Cuttack, and Khurda. Fani also damaged or destroyed energy infrastructure and many buildings, leaving around 3.5 million households without electric power for days after the storm hit.

The images on this page are data visualizations of where the lights went out across some of the worst affected areas in Odisha. The images show city lighting on April 30 (before the storm) and on May 5, 2019, two days after Fani made landfall. The storm destroyed several transmission towers and uprooted as many as 156,000 utility poles that must re-installed. The Odisha State Disaster Management Authority requested the data from NASA’s Black Marble science team for use in risk assessment and disaster recovery.

The images above show Bhubaneswar, the capital and largest city in the state. According to media reports on May 8, only a few percent of the people in the city have electricity. The Biju Patnaik International Airport suffered considerable damage to the passenger terminal, while the roof of the air traffic control tower was blown away. 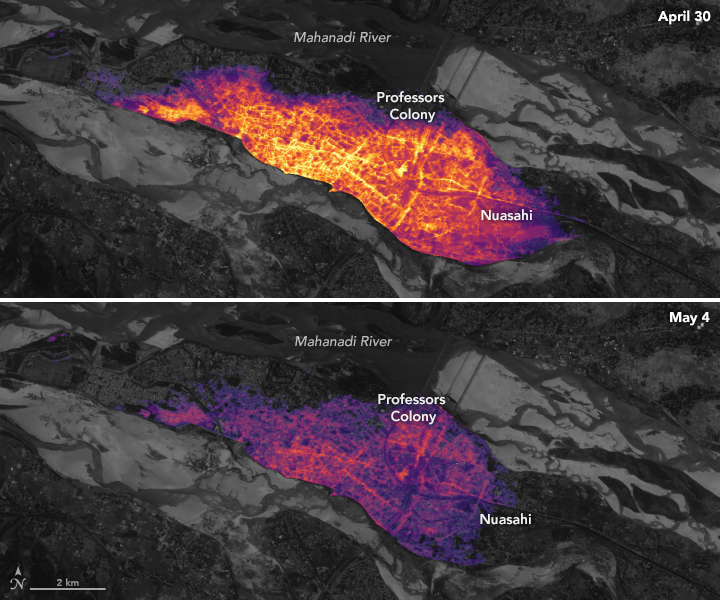 These images were made from data acquired by the Visible Infrared Imaging Radiometer Suite (VIIRS) on the Suomi NPP satellite. VIIRS has a “day-night band” that detects light in a range of wavelengths from green to near-infrared, including reflected moonlight, light from fires and oil wells, lightning, and emissions from cities or other human activity. The NASA Black Marble team processed and corrected the raw VIIRS data to filter out stray light from natural sources (for example, moonlight) and from atmospheric interference, such as dust, haze, and thin clouds.