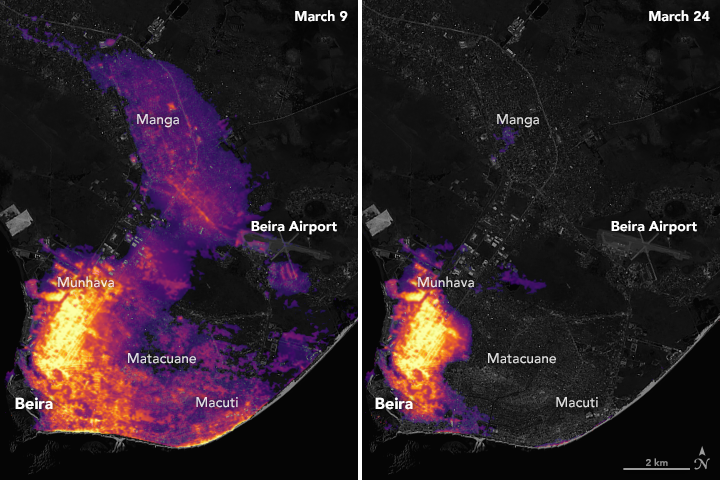 In March 2019, Tropical Cyclone Idai pummeled through southeastern Africa to become one of the deadliest storms ever recorded to hit the Southern Hemisphere. The storm caused catastrophic flooding, landslides, and large numbers of casualties across Mozambique, Malawi, and Zimbabwe. One of the most affected areas was Beira, Mozambique’s second-largest port city of 530,000 people, where the cyclone made landfall on March 14.

The storm “destroyed 90 percent” of Beira, according to an initial assessment by a team from the International Federation of Red Cross and Red Crescent Societies. As of March 20, an estimated 1 million people were without electricity.

The image on the left shows the extent of electric lighting across Beira on March 9, 2019, a typical night before the storm hit; the image on the right shows light on March 24, 2019, three days after Idai had passed. Nearly all electricity and internet went out, except near the airport where relief organizations had set up a server.

These images of Beira’s nighttime lights are based on data captured by the Suomi NPP satellite. The data was acquired by the Visible Infrared Imaging Radiometer Suite (VIIRS) “day-night band,” which detects light in a range of wavelengths from green to near-infrared, including reflected moonlight, light from fires and oil wells, lightning, and emissions from cities or other human activity. A team of scientists from NASA’s Goddard Space Flight Center and Marshall Space Flight Center processed and corrected the raw VIIRS data to filter out stray light from sources that are not electric lights as well as other atmospheric interference, such as dust, haze, and thin clouds. The base map makes use of data collected by the Landsat satellite.

The cyclone also knocked out transmission lines in Mozambique that carry power to South Africa. The major state-owned utility company in South Africa has been administering controlled blackouts for more than a week to conserve energy until power lines are fixed, which may take weeks to months. 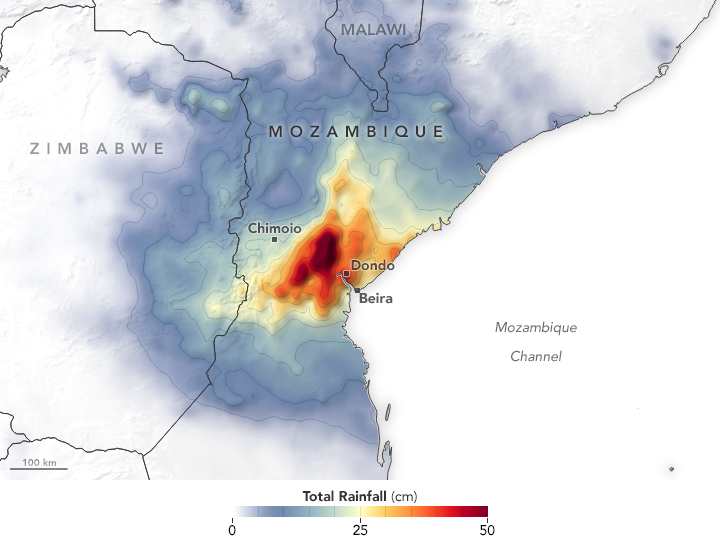