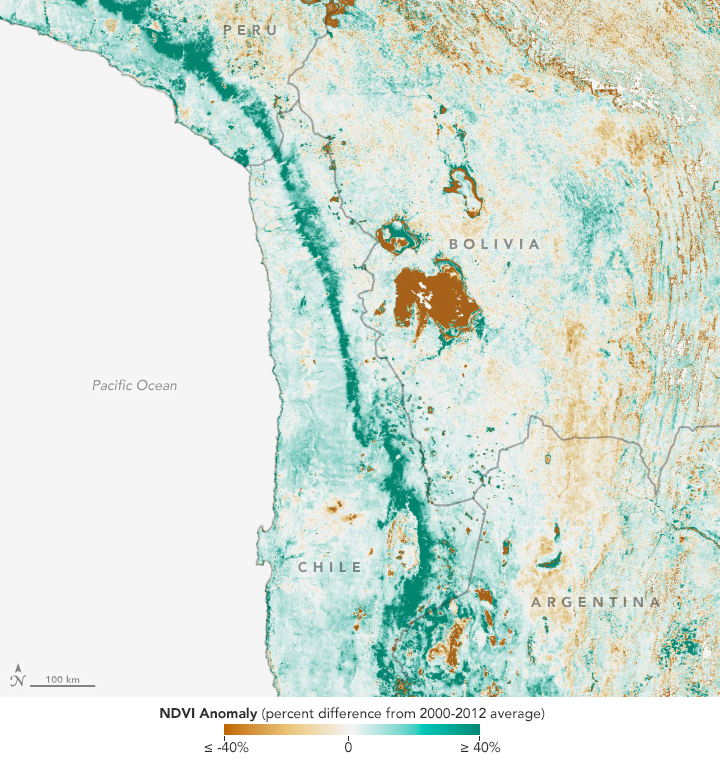 With some areas that receive just a few millimeters of rain per year and some that see none at all, the Atacama Desert in northern Chile is one of the driest places in the world. When it does rain, the landscape can transform.

The desert extends along the western edge of the Andes Mountains, which produce an intense rain shadow effect. The desert also sits next to a cool ocean current that chills the air and limits how much moisture it can hold. And often a zone of persistent high pressure blocks storms from moving into the area.

Still, water occasionally finds its way to the Atacama, as it did in January and February 2019. Storms, which are usually restricted to the highest parts of the Andes, dropped enough rain in the foothills to cause damaging floods in Arica, Tarapacá, and Antofagasta. The western slopes of the Andes were hit particularly hard, with several ground-based weather stations recording between 100 – 200 millimeters (4 – 8 inches) of rain. Between February 4 – 6, 2019, satellites measured more than 50 millimeters falling in wide bands near Calama and Camiña. According to news reports, several people died, hundreds of homes were destroyed, and thousands of people lost power due to the floods.

However, the rush of water left its mark on this hyper-arid region in a positive way, too. By March 2019, land surfaces that are typically brown and barren were blanketed with wildflowers and other vegetation. While the wildflowers are not easily visible in natural-color imagery from satellites, several sensors make observations of infrared light that make the greenup more apparent.

The NDVI anomaly map above is based on data collected by the Moderate Resolution Imaging Spectroradiometer (MODIS) on NASA’s Terra satellite between April 14 – 28, 2019. The map contrasts vegetation health against the long-term average (2000 – 2012) for that period. Greens indicate vegetation that is more widespread or abundant than normal for the time of year. The most greening occurred at elevations between 2500 – 3000 meters in a band that extended for hundreds of kilometers.

Wildflower blooms happen occasionally in the southern part of the Atacama Desert in winter. The last big event was in 2017. “This year is different and less studied because it is occurring in austral fall and farther north,” said René Garreaud, an Earth scientist at the Universidad de Chile. “It should be interesting to investigate the cause of last summer’s storms and see if the rain increases groundwater levels in the Pampa del Tamarugal.”

A recent analysis of satellite NDVI observations collected between 1981 and 2015 identified 13 Atacama greening events, with most beginning in the winter and remaining until the following summer.

A burst of wildflowers and other plant growth followed damaging floods in northern Chile.