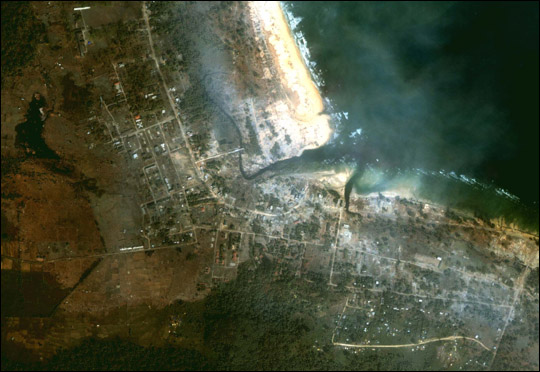 The true-color image above shows an inlet of Little Andaman Island, near the village of Kwate-tu-Kwage. Little Andaman Island is part of India’s Andaman Island chain, situated in the eastern Indian Ocean roughly 965 km (600 miles) south-southeast of Bangladesh. The image shows a swath of destruction (grayish patches) just inland from the beach as buildings and houses were damaged or swept away by surging seawater. The image was acquired on January 2, 2005, by the IKONOS satellite.

On December 26, 2004, a magnitude 9.0 earthquake hit off the west coast of Sumatra, Indonesia, sending shockwaves and tsunamis radiating out from the epicenter. According to news reports, as of January 2, 2005, no relief aid has been sent to the Andaman and Nicobar Islands and little is currently known about the extent of the damage and loss of life there.

Although this scene is partly obscured by a thin cloud overhead, many striking details can be seen in the full-resolution copy. A dark crescent of standing water can be seen to the west (left) of the village—possibly the remnants of the tsunami. The image also reveals tsunami destruction to structures along the coast and damage fairly far inland as well. In some cases structures have been ripped off foundations, which is especially noticeable near the inlet.