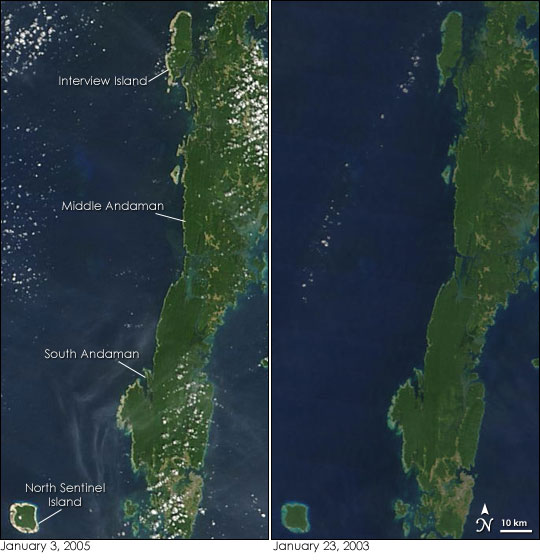 Among the first places to be affected by the massive tidal wave that ripped across the Indian Ocean on December 26, 2004, were the Andaman Islands. Located approximately 850 kilometers north of the epicenter of the earthquake that triggered the tsunami, the islands were not only among the first land masses to be swept under the wave, they have also been rattled by a series of aftershocks. Administrated by the Indian government, about 300,000 people live on the remote island chain, including several indigenous tribes. As of January 3, over 6,000 were confirmed dead or missing in the Andaman Islands.

This Moderate Resolution Imaging Spectroradiometer (MODIS) image pair shows a portion of the Andaman Islands on January 3, 2005, left, and January 23, 2003, right. In the most recent image, the beaches along the west side of the islands have been stripped bare, leaving a strip of bright tan land along the coast. The change is most notable on North Sentinel Island, home of the Sentinelese aboriginals, and on Interview Island, where the formerly green coastline has been replaced with an abnormally bright ring of bare sand. North Sentinel is fringed by a coral reef, which appears turquiose in the pre-tsunami image, but which may have been smothered in sand and sediment in the post-tsunami image. The large image reveals additional damage along all the islands of the Andaman chain.