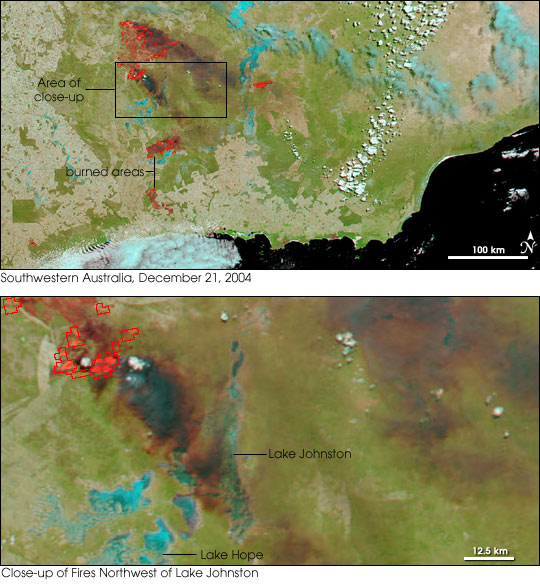 In the southwestern corner of Western Australia, several large fires were burning on December 21, 2001, when NASA’s Aqua satellite passed overhead. Over the weekend of December 18, firefighters contained several lightning-triggered fires burning along the southern coast, but these large fires to the north continued to rage. The image above is made from observations from the Moderate Resolution Imaging Spectroradiometer (MODIS) on Aqua. Vegetation appears bright green, burned areas appear reddish-brown, the ocean appears blue-black, and seasonal, salty lakes appear turquoise.

The top image in the pair shows the wide-area view, while the bottom image shows an area of detail around Lakes Johnston and Hope at MODIS’ maximum spatial resolution of 250 meters per pixel. Red has been used to outline pixels in which MODIS detected active fire. Dark smoke spreads southeast from the fires. The close-up also reveals an unusual sight for this kind of image: a very bright, red-orange "glow" inside the fire-detection pixels.