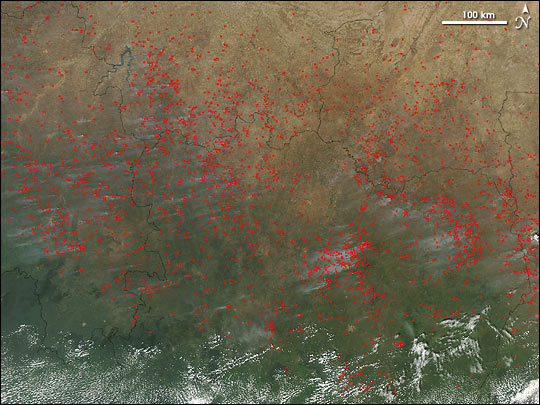 The image is centered on Côte D'Ivoire (Ivory Coast). Within the country, some regions were dotted with numerous scattered fires, while in other regions, for example the central and northeastern areas, fires are concentrated. December is one of the months in which farmers and herders engage in agricultural burning, and most of these fires are probably agricultural fires.

People set fires to clear farmland of the previous season's crop stubble, to stimulate the growth of new, more nourishing grasses, and in some cases, to clear woodlands and rainforests to create more room for agricultural activities. Although agricultural fires are not necessarily immediately hazardous, such large-scale burning can have a strong impact on weather, climate, human health, and natural resources.