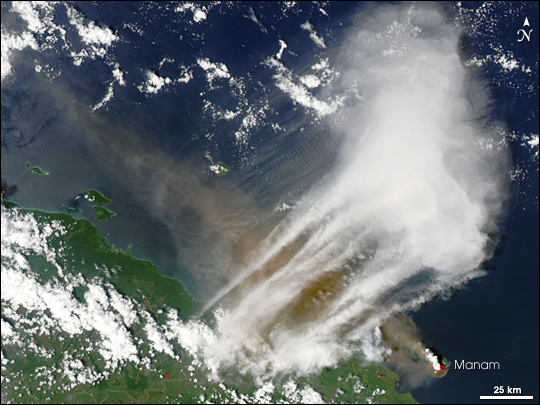 The island of Manam sits in the Bismarck Sea across the Stephan Strait from the east coast of mainland Papua New Guinea. Only 10 kilometers wide, the island results from the activity of the Manam Volcano, one of the country’s most active. In this image from the Moderate Resolution Imaging Spectroradiometer (MODIS) on NASA’s Aqua satellite on October 24, 2004, a large ash plume has spread northwestward from an eruption of Manam, located at bottom right. The thermally active areas on the volcano have been detected by MODIS and are outlined in red.

Interestingly, the winds higher up in the atmosphere appear to have been blowing in the opposite direction at the time this image was captured. Streamers of clouds stretch from the coast northeastward over the ash plume and farther out to sea. In the afternoon sunlight, the thicker clouds cast shadows down onto the ash plume. North of the cloud streamers, the tail of the ash plume is being rippled by the wind into rows of evenly spaced, nearly parallel waves.

The Manam Volcano has an interesting structure. Its 1,870-meter summit is bare and carved by four large avalanche valleys that radiate from the summit down the flanks. These valleys are spaced roughly 90 degrees apart around the cone-shaped mountain, and lava and pyroclastic debris flows have funneled through these valleys and reached the coast in past eruptions. The volcano has two summit craters, and both are active. The island is inhabited, and emergency agencies urged residents to move to safer parts of the island; however, according to news reports on October 27, no casualties had yet been reported.

After two months of silence, Manam erupted explosively on January 27, 2005, sending a cloud of sulfur dioxide over New Guinea. The Ozone Monitoring Instrument aboard NASA's new Earth-monitoring satellite, Aura, detected the plume as it drifted west over the island.