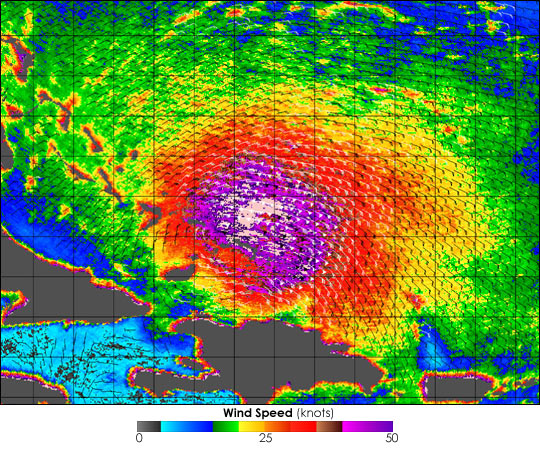 The SeaWinds scatterometer aboard NASA’s QuikSCAT satellite collected the data used to create this colorful image of hurricane Frances as it approached Cuba on September 1, 2004, at 6:09 p.m. EDT. The colored background shows the near-surface wind speeds at 2.5 km resolution. The strongest winds, shown in purple, are at the center of the storm, with gradually weakening winds forming rings around the center. The black barbs indicate wind speed and direction at QuikSCAT’s nominal 25 km resolution; white barbs indicate areas of heavy rain. The black grid over the image show degrees of latitude and longitude. The vertical lines of longitude start at 77 West on the left and run to 65 on the right. The horizontal lines of latitude start at 18 North on the bottom and run to 27 North on top.