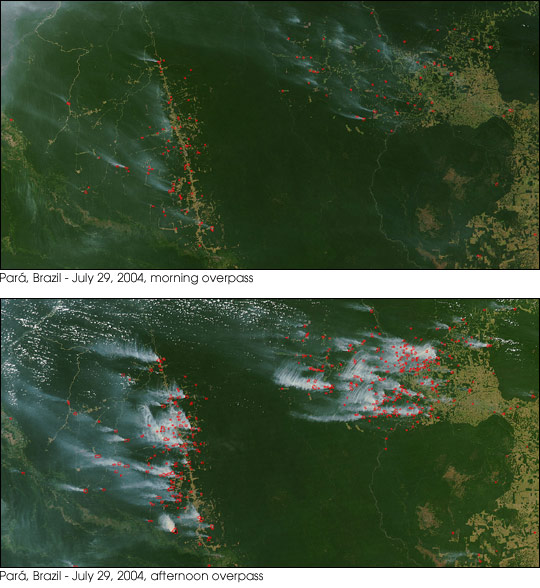 People are steadily blazing a trail into the undeveloped Amazon. This pair of NASA satellite images reveal the “slash-and-burn” deforestation by which people clear farm and pasture land out of the jungle. The name describes the process of cutting down the trees and setting fire to what is left, using the fire to return soil-fertilizing nutrients back to the soil from the vegetation.

The scene shows a section of southern Pará state in Brazil, just north of the border with Mato Grosso state on July 29, 2004. Right of image center, the Xingu River flows in from the south, but its obvious course disappears in a large clearing around the expanding airport town of Sao Felix. Left of center, a road cuts up through the forest, its ragged appearance the result of clearing that is occurring on either side. The morning image, captured by the Moderate Resolution Imaging Spectroradiometer (MODIS) on NASA’s Terra satellite, shows the surface more clearly than the afternoon image, captured by the MODIS on the Aqua satellite. By afternoon, fire activity (red outlines) had increased, and smoke was beginning to block the view.

In South America’s Amazon River Basin, the annual dry season is drawing to a close, but fires are still burning over a wide area near the Xingu National Park on September 28 and 29, 2004.