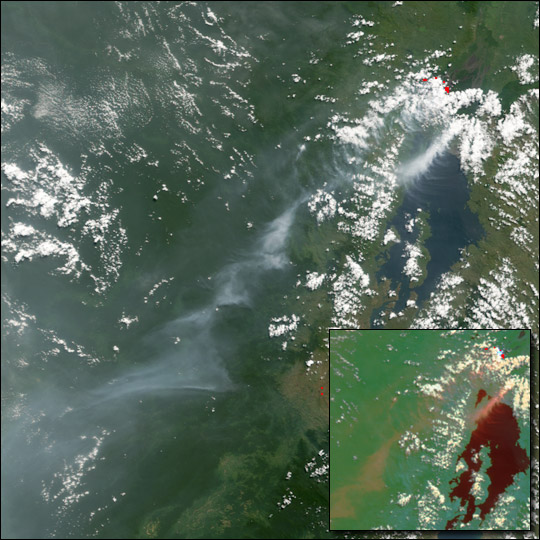 The borderland between Rwanda, the Democratic Republic of the Congo, and Uganda contains eight volcanoes, including Mount Nyamulagira and Mount Nyiragongo, which were both erupting on May 25, 2004. The volcanoes are both located north of Lake Kivu in Virunga National Park. The dense tropical forests of the park are home to endangered mountain gorillas. The African Wildlife Foundation does not believe that the eruptions will threaten the gorillas’ habitat, but cautions that ash may contaminate drinking water sources and food crops, forcing local people to turn to the park for material.

Mount Nyamulagira is Africa’s most active volcano. Its neighbor 14 kilometers (9 miles) to the northwest, Nyiragongo has the world’s fastest flowing lava. In 2002, 500,000 people in Goma were displaced when Nyiragongo erupted. Neither of this week’s eruptions have been reported to have caused damage, though ash falls have been reported within 60 kilometers (37 miles) of the volcanoes.

The Moderate Resolution Imaging Spectroradiometer (MODIS) on NASA’s Terra satellite captured this image of the eruptions on May 25, 2004. The large image shows the scene in true color. Red dots around Mount Nyiragongo indicate a thermal anomaly, and may be flowing lava or fires near the volcano. The inset shows the scene immediately around the volcanoes in false color to differentiate between cloud and the aerosol plumes. The plumes, which are a darker orange than the surrounding clouds, may be ash and steam or smoke from the fires around the volcanoes. Vegetation is dark green. The high-resolution image shows the scene in natural color at MODIS’ maximum resolution of 250 meters per pixel.

NASA image courtesy Jesse Allen, based on data from the MODIS Rapid Response Team at GSFC