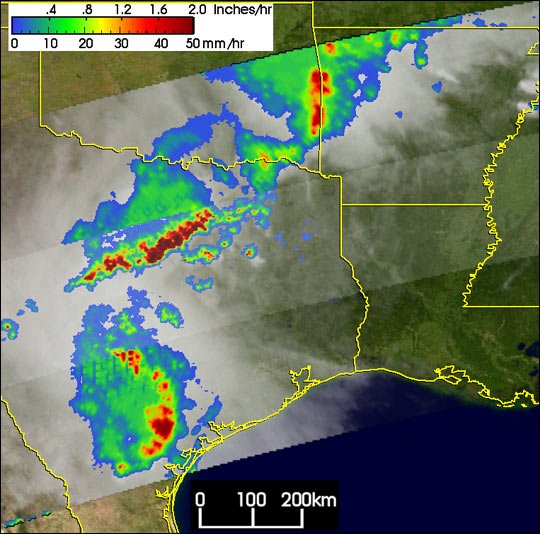 Springtime showers and thunderstorms dumped heavy rains over parts of northwestern Arkansas and south central Missouri over the weekend. Hardest hit was northwestern Arkansas where two children were swept away by flood waters west of Huntsville, Arkansas. A stationary front draped across central Arkansas from northern Texas to the Mid-Atlantic region provided the focus for strong storms as southerly winds pumped low-level moisture up from the Gulf of Mexico.

This image shows an instantaneous snapshot of the storms that led to the flooding taken by the Tropical Rainfall Measuring Mission (TRMM) satellite. The image was taken at 06:30 UTC on 24 April 2004. It shows the horizontal distribution of rain intensity as seen from above by the TRMM satellite. Rain rates in the center swath are from the TRMM Precipitation Radar (PR), the first and only precipitation radar in space, and rain rates in the outer swath are from the TRMM Microwave Imager (TMI). The rain rates are overlaid on infrared (IR) data from the TRMM Visible Infrared Scanner VIRS).

TRMM shows three different mesoscale convective systems known as MCSs: one over south central Texas, one over north central Texas and one along the Oklahoma-Arkansas border. MCSs typically contain showers and/or thundershowers along their leading edge that contain strong updrafts and produce heavy rain (as seen by the red areas) followed by or adjacent to areas of stratiform rain with weaker rainrates (green areas). The southernmost MCS has a horseshoe type shape indicative of a mature MCS whereby strong winds entering the rear of the system deform the storms along the leading edge into a bow shape. Convection in the middle MCS is more linear and very intense as shown by the dark red areas indicative of a squall line. The third MCS that is farthest north has a broad area of stratiform rain (green area) of moderate intensity centered on the convection.

An additional image shows a vertical slice taken by the TRMM PR through the central MCS looking east. It shows intense rainrates associated with the leading edge convection. The leading edge is made up of many convective elements as evidenced by the cellular nature of the intense echoes (dark red areas) associated with the numerous protruding towers (green and yellow areas extending vertically).

Heavy rains over much of Arkansas have triggered floods.