Hydrogen Sulfide Eruptions along the Coast of Namibia 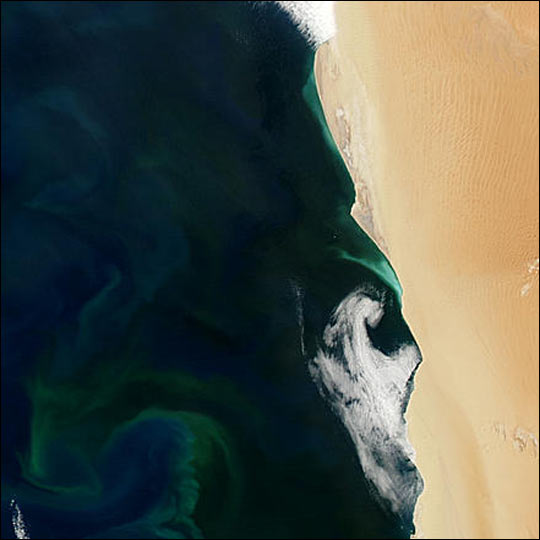 On April 18, 2004, the Moderate Resolution Imaging Spectroradiometer (MODIS) on the Aqua satellite detected several bright green hydrogen sulfide eruptions along the coast of Namibia. The eruptions, which are deadly to fish, occur when bacteria release hydrogen sulfide gas as they break down dead plants and animals that have sunk to the sea floor. As the gas rises to the surface, it interacts with oxygen to form solid white sulfur, which tints the water the bright green color seen here.

Hydrogen sulfide eruptions happen frequently off the shore of Namibia because of patterns in the ocean currents called upwelling. In this region, cold water pushes nutrients from the ocean floor to the surface, where ocean life thrives. In particular, large colonies of microscopic ocean plants, phytoplankton, grow in the nutrient rich water, forming the dark green swirls seen in this image. As the plants use all of the nutrients, they die and sink to the sea floor where bacteria consume them. The bacteria release toxic hydrogen sulfide gas into the soil. Eventually, the toxic gas erupts from the soil. In addition to the bright waters seen by satellites, the event is marked by massive fish die-offs and a strong smell that resembles rotten eggs. To date, hydrogen sulfide eruptions have only been observed off the shore of Namibia.

Additional eruptions can be seen further down the coast at 250 meters per pixel in the high-resolution image provided above. The image is also available in additional resolutions. The MODIS instrument on the Terra satellite captured an earlier phase of the eruption on April 17, 2004.