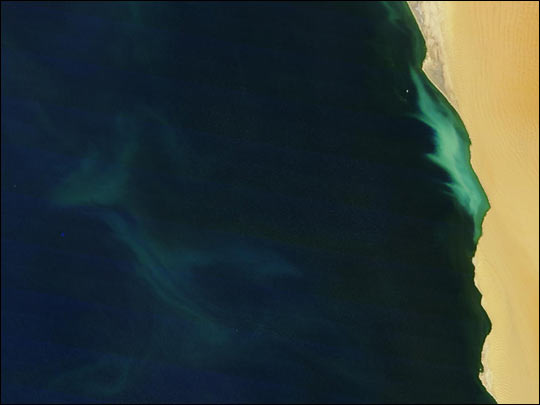 Bright colors in the ocean waters off the coast of Namibia tell a story of marine life and death. In this region of the South Atlantic, winds push the warm surface water westward, and cold waters from the bottom of the ocean rush up in their place. The cold water carries with it the nutrients that have sunk to the ocean floor, providing a boon to ocean life. In particular, microscopic plants called phytoplankton thrive on the added nutrients. In turn, these tiny plants are a source of food for many other ocean dwellers.

In this Moderate Resolution Imaging Spectroradiometer (MODIS) image acquired on April 10, 2004, by the Terra satellite, a dark green swirl of water in the ocean shows where a colony of phytoplankton bloom. The individual plants grow quickly, then die after a few days. Their remains sink to the ocean floor where bottom-dwelling bacteria break them down. Eventually, the bacteria use all of the oxygen, and a second form of bacteria take over. These bacteria, anaerobic bacteria, release toxic hydrogen sulfide gas as they consume the decomposing plants. The gas rises to the surface along the Namibian coast, where it turns to pure sulfur in reaction to oxygen in the water. The yellow sulfur tints the blue water a bright green in this satellite image. Called hydrogen sulfide eruptions, the phenomenon has only been observed along the Namibian coast.

Sadly, the decomposing plants are lethal to the life they once supported. Hydrogen sulfide gas can kill large populations of fish and other marine life. As a result, the waters off the coast of Namibia are closely monitored by the regional fishing and aquaculture industry.

A milky green cloud in the water off Namibia marks an eruption of hydrogen sulfide gas from bacteria on the ocean floor.