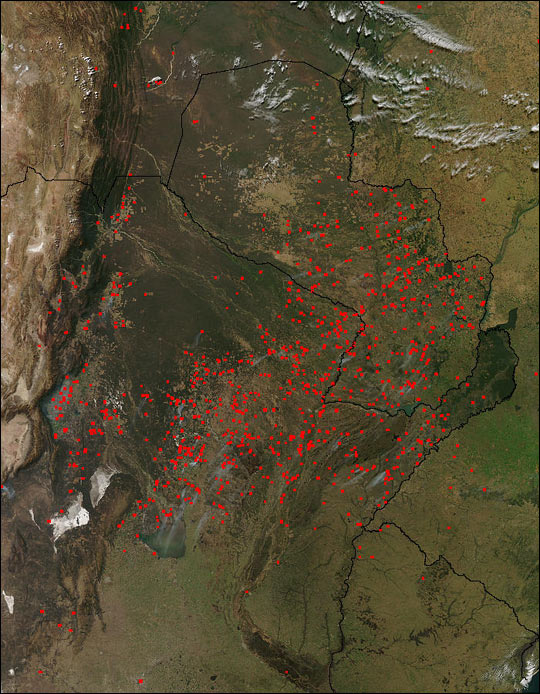 Scores of fires (red dots) burn across the South American countries of (clockwise from upper right) Bolivia, Paraguay, Brazil, Uruguay, and Argentina in this true-color Moderate Resolution Imaging Spectroradiometer (MODIS) image from the Aqua satellite acquired on August 11, 2003. The fires, which are marked in red, are mostly concentrated in the Gran Chaco region, which stretches across northeastern Argentina, southern Bolivia, and southern Paraguay.

The Gran Chaco is an extensive arid lowland plain that is alternately dotted with swamps (in the rainy season) and dense forests. The region is sparsely populated; some of the highest temperatures in South America have been recorded here, and there are only a few crops for settlers to grow that will survive in the region. Cotton is one: it is grown primarily in the Chaco Central, south of the Pilcomayo River in Argentina. The forests are home to the quebracho tree (source of much of the vegetable tanin used in leather curing) which is one of the most durable hardwood trees, and is the other pillar of the Gran Chaco’s economy. Unfortunately, due to its popularity, quebracho tree populations are dwindling.

Hundreds of fires first pictured on August 1 were still visible in this recent image of South America captured by the Moderate Resolution Imaging Spectroradiometer (MODIS) on the Aqua satellite on August 20, 2003.