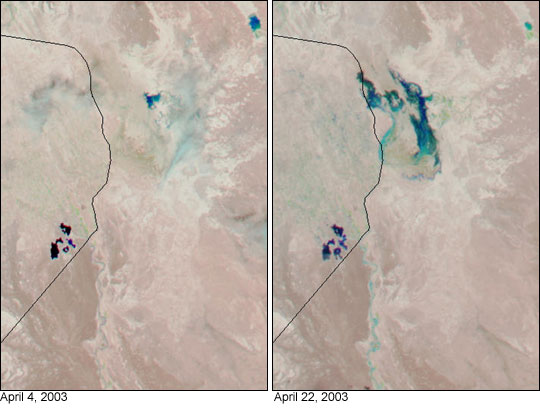 In mid-April 2003, heavy rains in Afghanistan led to floods that killed 30 people and displaced hundreds. The floodwaters can be seen in this false-color image (right) acquired on April 22, 2003, by the Moderate Resolution Imaging Spectroradiometer (MODIS) aboard NASA’s Aqua spacecraft. The most devastating floods occurred in southern Afghanistan in the Helmand province along the Helmand River.

Earlier in the month (left, acquired by MODIS Aqua on April 4, 2003), there was much less standing water in southern Afghanistan. And the Helmand River, which can be seen winding its way up from the bottom of April 22 image, is hardly visible on April 4. In this false-color image, water is blue. Clouds appear as pale blue and white, vegetated land is green and arid land is tan.