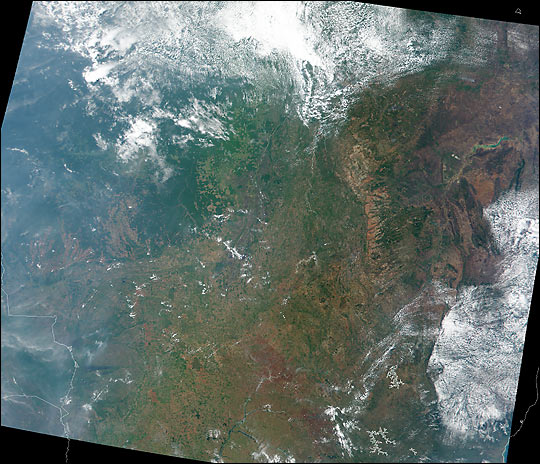 This Moderate resolution Imaging Spectroradiometer (MODIS) true-color image was acquired on October 19, 2000, over a region in Brazil large enough to show much of the country’s diverse landscape. Spanning some 8.5 million square kilometers (3.2 million square miles), Brazil is by far the largest South American nation--both in terms of land and population.

The region known as the Amazon Basin lies to the northwest (upper left) and extends well beyond the northern and western edges of this scene. Typically, from this perspective Amazonia appears as a lush, dark green carpet due to the thick canopy of vegetation growing there. Some of the Amazon Basin is visible in this image, but much is obscured by clouds (bright white pixels), as is the Amazon River. This region is home to countless plant and animal species and some 150,000 native South Americans. The clusters of square and rectangular patterns toward the center of the image (light green or reddish-brown pixels) are where people have cleared away trees and vegetation to make room for development and agriculture.

Toward the western side of the scene there is considerable haze and smoke from widespread biomass burning in parts of Brazil and Bolivia, which shares its eastern border with Brazil. Toward the east in this image is the highland, or “cerrado,” region, which is more sparsely vegetated and has a somewhat drier climate than the Amazon Basin. The capital city, Brasilia, lies within this region just southwest of the Geral de Goias Mountains (orangish pixels running north-south).

There are two large water reservoirs visible in this scene--the Sobradinho Reservoir about 800 km (500 miles) northeast of Brasilia, and the Paranaiba about 500 km (300 miles) southwest of Brasilia.

Slash and Burn Agriculture in Brazil