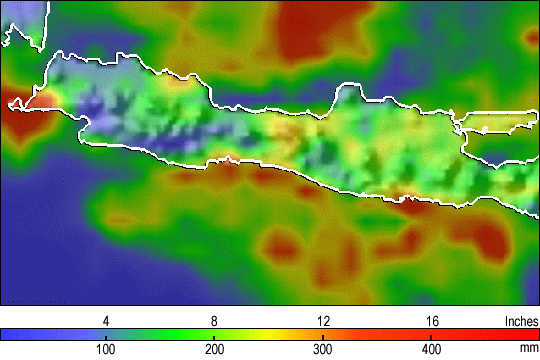 This rainfall accumulation map, generated by NASA’s Tropical Rainfall Measurement Mission (TRMM) satellite, shows locally heavy rains which fell over the mountainous terrain of Java, Indonesia, during the last week of December. These rains produced severe flash flooding, mudslides, and numerous deaths across the island. More than 365,000 inhabitants were displaced from their homes due to the severe weather. A larger and persistent area of heavy rain has recently occurred throughout Indonesia, and may be the result of a slow-moving, wavelike tropical disturbance called the Madden Julian Oscillation (MJO). The MJO is generated over the Indian Ocean and moves eastward, crossing over Indonesia, northern Australia, and southern Asia. The disturbance often occurs on a six- to nine-week cycle and can bring several days of torrential rains as it passes over a region.

More images of extreme rain over southeast Asia and surrounding areas may found on the TRMM Web site.