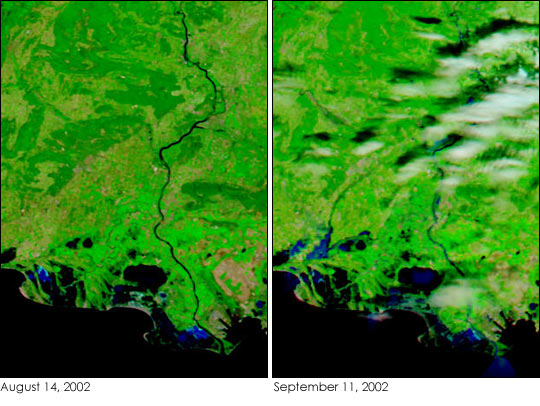 Torrential rains earlier this week led to severe flooding in southern France that killed as many as 26 people and forced hundreds from their homes. The floods can be seen in this false-color image (right) acquired on September 11, 2002, by the Moderate Resolution Imaging Spectroradiometer (MODIS) aboard NASA’s Aqua spacecraft. The river running down the center of the image is the Rhone River, which flows into the Golfe du Lion. Comparing the image to one taken before the floods (left, acquired August 14 from Terra MODIS), an otherwise unseen tributary is visible to the left of the river and the salt marshes around the river delta have grown substantially larger. Most of the deaths occurred when a dam gave way in the village of Aramon, which sits along the Rhone River in the center of the image. In addition to those killed, over 30 people are still missing.