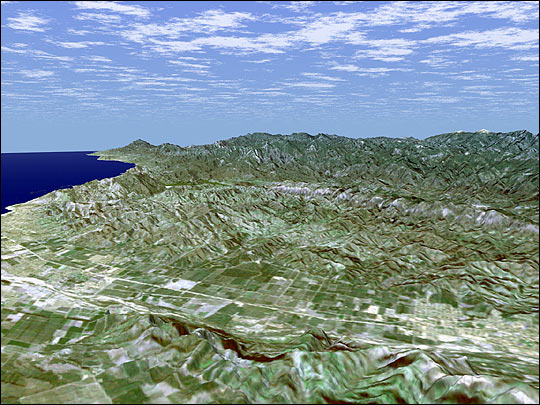 Rectangular fields of the agriculturally rich Santa Clara River Valley are visible in this perspective view generated using data from the Shuttle Radar Topography Mission (SRTM) and an enhanced Landsat image. The Santa Clara River, which lends its name to this valley, flows from headwaters near Acton, California, 160 km (100 miles) to the Pacific Ocean, and is one of only two natural river systems remaining in southern California. In the foreground of this image, the largely dry riverbed can be seen as a bright feature as it winds its way along the base of South Mountain. The bright region at the right end of this portion of the valley is the city of Santa Paula, California. Founded in 1902, this small, picturesque town at the geographic center of Ventura County is referred to as the "Citrus Capital of the World." The city is surrounded by orange, lemon, and avocado groves and is a major distribution point for citrus fruits in the United States. The bright, linear feature in the center of the valley is State Highway 126, the valley's "main drag." For visualization purposes, topographic heights displayed in this image are exaggerated two times. Colors, from Landsat data, approximate natural color.