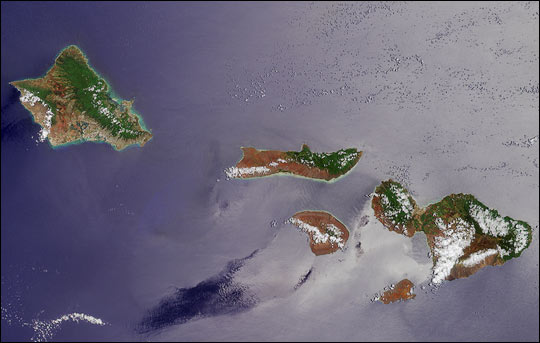 The image shows the islands of Oahu, Molokai, Lanai, Maui, and Kahoolawe. The prevailing Pacific trade winds bring higher levels of rainfall to the eastern slopes of the islands, leading to a greater abundance of vegetation on the windward coasts. The small change in observation angle across the nadir camera’s field-of- view causes the right-hand portion of the image to be more affected by Sun glint, making the ocean surface appear brighter.

Oahu is the westernmost of the islands seen in this image. Waikiki Beach and the city of Honolulu are located on the southern shore, to the west of Diamond Head caldera.

MISR is one of several Earth-observing instruments on the Terra satellite, launched in December 1999. The Terra spacecraft, the flagship of a fleet of satellites dedicated to understanding our global environment, is part of NASA's Earth Sciences Enterprise, a long-term research program dedicated to understanding how human-induced and natural changes affect our world.