This page contains archived content and is no longer being updated. At the time of publication, it represented the best available science.
i

For all of the novel and sophisticated technology that has been flown on the space shuttles, the most underrated instrument to fly in space is the human eye.

“Humans are smart, trainable sensors,” says Kam Lulla, former chief scientist for Earth observation in the Human Exploration Science Office at NASA’s Johnson Space Center. Astronauts have unique sensing capabilities, including the knowledge to identify and interpret changes and features on the planet, and the ability to react to events and conditions—from changing the angle, width, or focus of a camera shot to adjusting for sunlight. “We take NASA’s astronauts, who are already very smart, accomplished people, and we work to make them Earth-smart. We train their minds for science in orbit.” 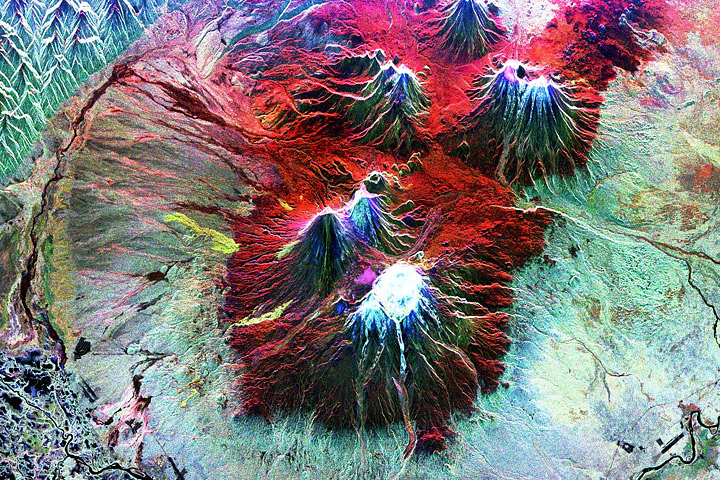 The images on this page show the blending of high-technology with high-mindedness. In 1994, the Spaceborne Imaging Radar-C / X-band Synthetic Aperture Radar (SIR-C/X-SAR) collected the land surface data to build the top image of Klyuchevskaya (Klyuchevskoi) volcano on Russia’s Kamchatka Peninsula. The volcano, one of the world’s most active, is the blue, triangular peak in the lower center of the image, while the bright red area delineates snow cover. Two other active volcanoes are also visible: Bezymianny, the circular crater above and to the right of Klyuchevskaya, and Tolbachik, the large volcano with a dark summit crater near the upper right edge.

While the Space Radar Laboratory 2 was busy collecting data, the astronauts on Endeavour did their own observing. They picked up still- and video cameras and captured dramatic footage, just hours after the eruption started on September 30, 1994. With the eruption near its peak, the crew got a “nadir,” or straight down view (middle image) of the black plume and of the ash falling on the mountainsides. Some time later, they used a 70-millimeter lens to look back at the extent of the plume, which reached altitudes of 15,000 meters (50,000 feet).

“Photographs from the Space Shuttle are punctuated snapshots of distinct places on Earth,” says Cindy Evans, an Earth scientist and long-time trainer and ground-based guide to astronauts. “They are framed by a human eye and perspective, and they are accessible to anyone. These images speak to people.”