The Antarctic is in some ways the opposite of the Arctic. The Arctic is an ocean basin surrounded by land, with the sea ice corralled in the coldest, darkest part of the Northern Hemisphere. The Antarctic is a continent surrounded by ocean. Whereas Northern Hemisphere sea ice can extend from the North Pole to a latitude of 45°N (along the northeast coasts of Asia and North America), most of the ice is found above 70°N. Southern Hemisphere sea ice does not get that close to the South Pole; it fringes the continent and reaches to 55°S latitude at its greatest extent.

Sea ice around Antarctica peaks in September and reaches a minimum in February. Roughly 15 million square kilometers of ice melt and freeze during the annual cycle. (NASA Earth Observatory graph by Joshua Stevens, based on data from the National Snow and Ice Data Center.)

To study patterns and trends in Antarctic sea ice, scientists commonly divide the ice pack into five sectors: the Weddell Sea, the Indian Ocean, the western Pacific Ocean, the Ross Sea, and the Bellingshausen and Amundsen seas. In some sectors, it is common for nearly all the sea ice to melt in the summer.

Antarctic sea ice is distributed around the entire fringe of the continent—a much broader area than the Arctic—and it is exposed to a broader range of land, ocean, and atmospheric influences. Because of the geographic and climatic diversity, Antarctic sea ice is more variable from year to year and climate oscillations don’t affect ice in all sectors the same way. For these reasons, it is more difficult to generalize the influence of climate patterns to the entire Southern Hemisphere ice pack. 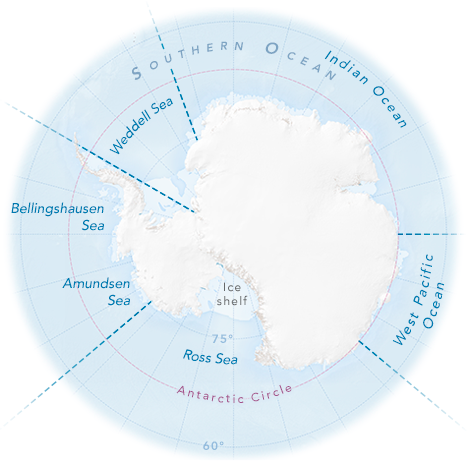 Antarctica experiences atmospheric oscillations and recurring weather patterns that influence sea ice extent. The primary variation is the Antarctic Oscillation, also called the Southern Annular Mode. Like the Arctic Oscillation, the Antarctic Oscillation involves a large-scale see-sawing of atmospheric mass between the pole and the mid-latitudes. This oscillation can intensify, weaken, or shift the location of low- and high-pressure weather systems. These changes influence wind speeds, temperature, and the track that storms follow, any of which may influence sea ice extent.

During positive phases of the Antarctic Oscillation, the prevailing westerly winds that circle Antarctica strengthen and move southward. This can change the way ice is distributed among the various sectors. The strengthening of the westerlies also isolates much of the continent and tends to have an overall cooling effect. However, it does cause dramatic warming on the Antarctic Peninsula, as warmer air above the oceans to the north is drawn southward. Winds may drive the ice away from the coast in some areas and toward the coast in others. Thus, the same climate influence may lessen sea ice in some sectors and increase it in others.

Changes in the El Niño-Southern Oscillation Index (ENSO), an oscillation of ocean temperatures and surface air pressure in the tropical Pacific, can lead to a delayed response (three to four seasons later) in Antarctic sea ice extent. In general, El Niño leads to more ice in the Weddell Sea and less ice on the other side of the Antarctic Peninsula, while La Niña causes the opposite conditions.

Another bit of atmospheric variability is the periodic strengthening and weakening of something meteorologists call “zonal wave three,” or ZW3. This pattern alternately strengthens winds that blow cold air away from Antarctica (toward the equator) and winds that bring warmer air from middle latitudes toward Antarctica. When southerly winds intensify, more cold air is pushed to lower latitudes, and sea ice tends to increase. The effect is most apparent in the Ross and Weddell Seas and near the Amery Ice Shelf.

As in the Arctic, the interaction of natural cycles is complex, and researchers continue to study how these forces interact and control the Antarctic sea ice extent. 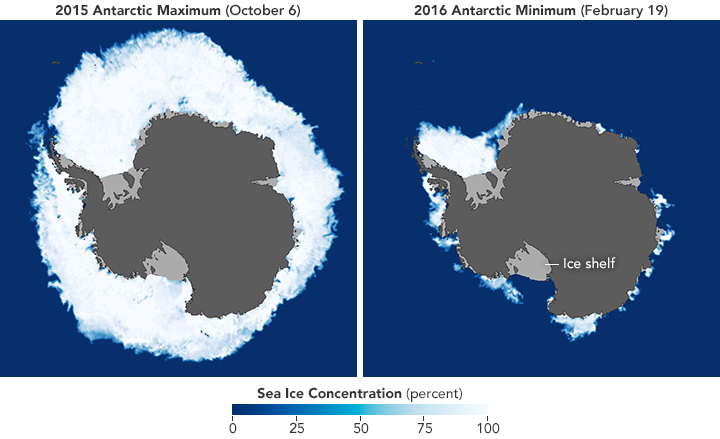 Since 1979, the total annual Antarctic sea ice extent has increased about 1 percent per decade. Compared to the Arctic, the signal has been a “noisy” one, with wide year–to-year fluctuations. For three consecutive Septembers (2012 to 2014), satellites observed new record highs for winter sea ice extent around Antarctica. The largest of those occurred in September 2014, when the ice reached 20.14 million square kilometers (7.78 million square miles). Still, increases in Antarctic sea ice are exceeded by decreases in the Arctic. That is to say, global sea ice is decreasing even as Antarctic sea ice is increasing slightly.

Unlike the Arctic, where the downward trend is consistent in all sectors, in all months, and in all seasons, the Antarctic picture is more complex. Although sea ice cover expanded in most of the Southern Ocean between 1979 and 2013, it decreased substantially in the Bellingshausen and Amundsen seas. These two seas are close to the Antarctic Peninsula, a region that has warmed significantly in recent decades. 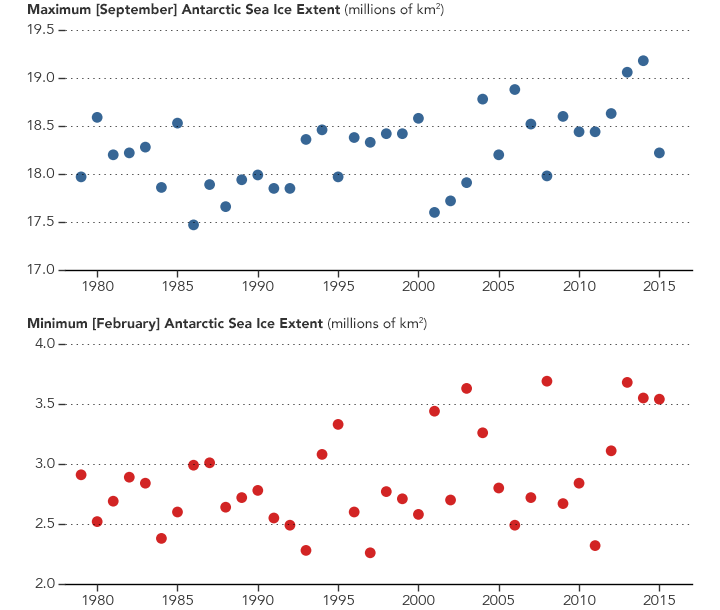 Antarctic sea ice does not plainly show the effects of global warming. There is little evidence of long-term change in either the maximum (September) or minimum (February) ice extent. (NASA Earth Observatory graph by Joshua Stevens, based on data from the National Snow and Ice Data Center.)

Why do the negative trends in Arctic sea ice seem to be more important to climate scientists than the increase in Antarctic ice? Part of the reason is that the size of the increase is much smaller and slightly less certain than the Arctic trend.

Another reason is that the complete summertime disappearance of Northern Hemisphere ice would be a dramatic departure from what has occurred throughout the satellite record and likely throughout recorded history. In the Antarctic, however, sea ice already melts almost completely each summer. Even if it completely disappeared in the summer, the impact on the Earth’s climate system would likely be much smaller than a similar disappearance of Arctic ice.

You might wonder how Antarctic sea ice could be increasing while global warming is raising the planet’s average surface temperature. It’s a question scientists are asking, too. One reason may be that other atmospheric changes are softening the influence of global warming on Antarctica. For example, the ozone hole that develops over Antarctica each spring actually intensifies a vortex of winds that circles the South Pole. The stronger this vortex becomes, the more isolated the Antarctic atmosphere becomes from the rest of the planet. In addition, ocean circulation around Antarctica behaves differently than it does in the Arctic. In the Southern Ocean, warm water tends to sink downward in the ocean’s water column, making sea ice melt from warm water less likely. 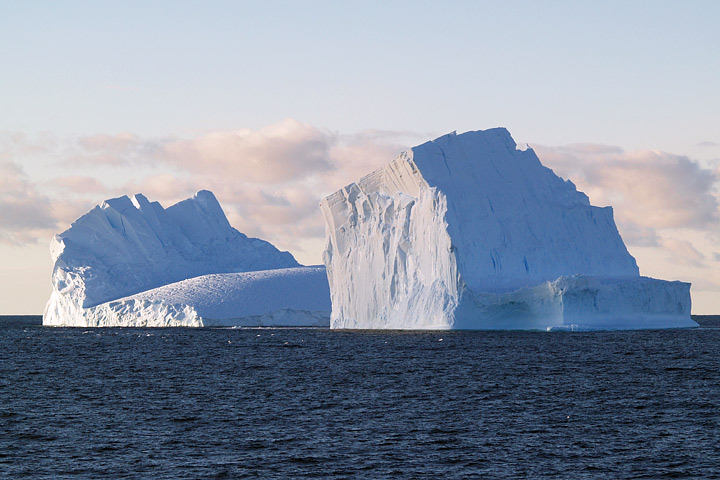 One concern related to Antarctic sea ice loss is how the relationship between land and sea ice will change. Ice shelves partly rest on land and partly float, and sea ice is thought to stabilize the edges of these shelves. Ice shelves frequently calve icebergs—a natural process that is not necessarily a sign of climate change. But the rapid disintegration and retreat of an ice shelf (such as the collapse of Larsen B in 2002) is a warming signal.

The interaction between sea ice loss and ice shelf retreat merits careful study because many ice shelves are fed by glaciers. When an ice shelf disintegrates, the glacier feeding it often accelerates. Because glacier acceleration introduces a new ice mass into the ocean, it can raise global sea levels. So while sea ice melt does not directly lead to sea level rise, it could contribute to other processes that do. Glacier acceleration has already been observed on the Antarctic Peninsula.