The Asian monsoon is one of the world’s most studied weather patterns. Sunlight warms the land surfaces of Central Asia, and the warm surface air rises into the atmosphere. This updraft draws in cooler, moister air from over the Indian Ocean. The Himalayas supercharge this convection process by blocking air masses from migrating into central Asia. Instead, the moist air masses rise, cool, and condense the water into rain.

In 2010, this pattern went awry over Pakistan. Over and over again, the rainstorms dwarfed the heaviest rainfall events from the previous, more typical summer. July rainfall in Peshawar, for instance, was up 772 percent from normal, according to the Pakistan Meteorological Department. August rainfall in Khanpur was up 1,483 percent.

The 2010 floods in Pakistan were caused by extremely high rainfall in the Indus River watershed during July and August. These maps show the satellite estimates of the difference in rainfall between 2010 and the long-term average for the region. (Maps by Jesse Allen and Robert Simmon, using data from the Global Precipitation Climatology Project.)

The relentless rain had a handful of causes. For one, the global La Niña event—which drenched Australia and other Pacific and Indian Ocean locations in late 2010 and early 2011—actually started around the time of the 2010 monsoon. La Niña warms both water and air masses, increasing the amount of moisture that can be carried in the atmosphere.

While La Niña increased the chance of rain events, it did not necessarily increase the intensity and unusual persistence. Instead, some meteorologists speculated in late 2010 that the jet stream might have set the stage for floods in Pakistan, as well as the summer of drought and fire in Russia. Some noted in science meetings that the jet stream had taken on an unusual pattern, stretching down over the Eurasian continent and stagnating the weather patterns. 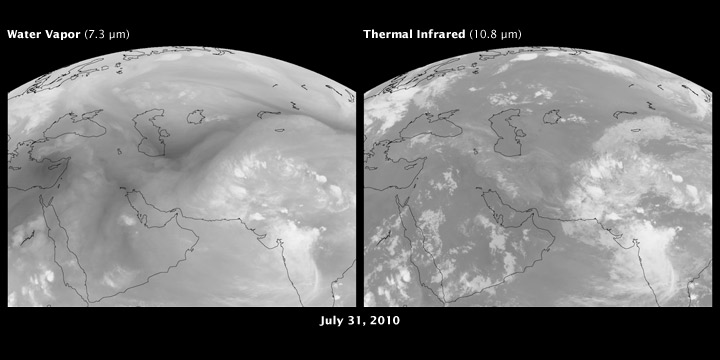 A long-lived high-pressure system north of the Black Sea trapped hot air over Russia in 2010, and triggered heavy rainfall over Pakistan. This image shows water vapor in the atmosphere (left) and thermal infrared emissions of the Earth (right). Water is bright in the left image; on the right, dark areas are hot (desert in mid-day) and cold areas (cloud tops) are white. The animation shows the interaction between high-level flow of water vapor and the dynamics of clouds. (NASA image by Robert Simmon, using data ©2010 EUMETSAT.)

In a subsequent study (in press) using NASA satellite data, scientists William Lau and Kyu-Myong Kim of NASA’s Goddard Space Flight Center found a connection between the wildfires and floods. The Russian heat wave and wildfires were associated with a large-scale, stagnant weather pattern in the atmosphere—known as a blocking event—that prevented the normal movement of weather systems from west to east. Hot, dry air masses became trapped over large parts of Russia.

The blocking also created unusual downstream vortices and wind patterns. Clockwise atmospheric circulation near the surface brought cold, dry Siberian air into the subtropics, where it clashed with the warm, moist air being transported northward with the monsoon flow. The result was torrential rain in northern Pakistan.

Although the heat wave started before the floods, both events attained maximum strength at approximately the same time. Lau’s team concluded that Pakistan’s floods were triggered by the southward penetration of upper level disturbances from the atmospheric blocking, and amplified by heating and monsoon moisture from the Bay of Bengal. La Niña conditions made the tropics more receptive by providing abundant moisture.

The high pressure system over Russia was a type of blocking event, a persistent pattern in the jet stream. This map shows areas of relatively high pressure (red) and low pressure (blue) from July 25 to August 8, 2010. The map data were derived from a reanalysis—estimates of meteorological data based on a blend of actual measurements and computer models. (Map by Jesse Allen and Mike Bosilovich, using data from MERRA.)

Most of the time Pakistan usually suffers from too little water, not too much. So were the 2010 floods a sign of things to come?

“One event by itself is not evidence of a long-term shift,” says Peter Clift, a geologist from the University of Aberdeen (Scotland) who has studied the Indian monsoon. “Floods have happened in the past without global warming.”