In the mid-1990s, highly pathogenic avian influenza (bird flu) emerged in southern China. Severe outbreaks in the winter of 2005-2006 spread the virus, designated H5N1, across Asia, Europe, and Africa, killing hundreds of people, thousands of wild birds, and millions of poultry. In fall 2009, scientists and public health officials continued to watch H5N1 closely for signs that, like H1N1 (“swine flu”), it had evolved into a form capable of creating a pandemic.

Landscape ecologist Xiangming Xiao of the University of Oklahoma is part of a large group of scientists from U.S. and international scientific and public health organizations who are trying to predict areas at high risk for future avian influenza outbreaks. Xiao and his team use satellite images to map the location of rice paddies and wetlands in China and Southeast Asia, something that Landsat images will allow them to do in much more detail. 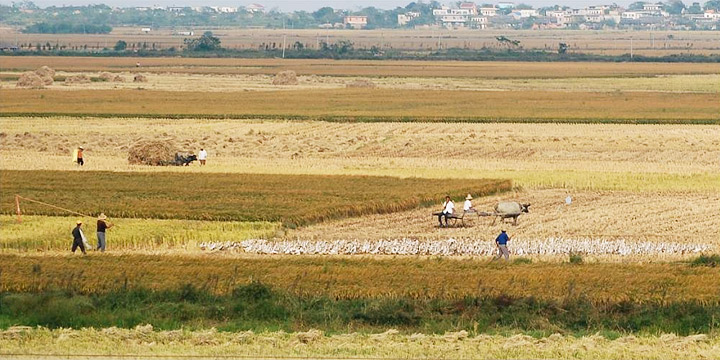 “Harvested rice paddies have become a stage where wild water birds, which naturally carry low pathogenic types of the virus, and domestic ducks mix,” explains Xiao. “In that mixing, virus transmission might occur.” As the virus spreads among species, the possibility for evolution into a highly pathogenic type of flu increases.

Xiao currently uses observations from the MODIS sensor on NASA’s Terra satellite for this stage of the analysis because it depends on frequent images of the same area. MODIS provides daily observations of most places on Earth, but the images show only a moderate amount of detail. “In many cases, rice paddies are smaller than the 250-meter pixels in the MODIS images,” explains Xiao, “and we miss them.”

“We need that kind of detail to better understand how and when the birds are moving among the different habitats where they can acquire or transmit the H5N1 virus,” says Xiao.

Return to: The Coverage Problem