Fires raging in Indonesia. Fisheries collapsing off Peru. Delayed monsoon rains over India. Floods and mosquito-borne disease outbreaks in South America. Epic drought and mass migrations in southern Africa. Once an El Niño is declared, it seems every extreme weather-related event in the world is blamed on this phenomenon.

El Niño is the largest natural disruption to the Earth system, with direct impacts across most of the Pacific Ocean. Indirect impacts reverberate around the globe in patterns that scientists refer to as "teleconnections." Scientists are actively trying to understand how these changes in weather patterns in one area can alter the movement of air masses and winds in areas adjacent to and even far away from the source. According to the International Research Institute for Climate and Society at Columbia University, El Niño-Southern Oscillation is responsible for as much as 50 percent of year-to-year climate variability in some regions of the world.

So which impacts are actually typical and traceable to El Niño? 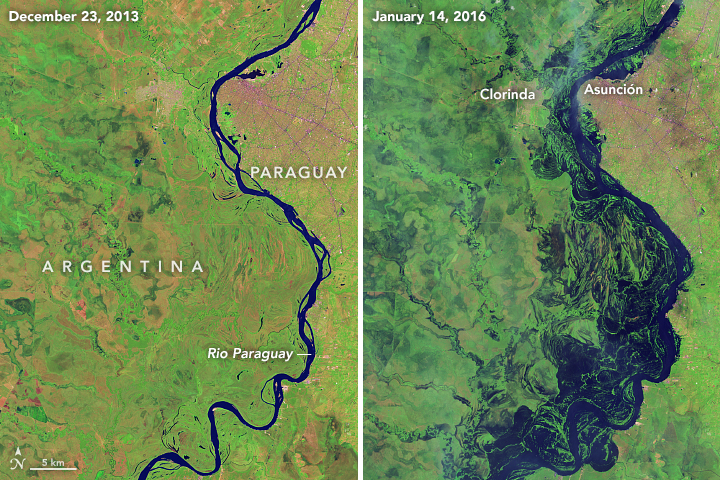 The effects are most immediate in the equatorial Pacific. The thicker, warmer surface layer of water in the Eastern Pacific suppresses the upwelling of cooler, nutrient-rich water from the depths. Less nutrients mean less phytoplankton, which in turn leads to hunger all around the food web. Higher forms of marine life across the tropical Pacific—such as tuna, sea turtles, and seabirds—move to different feeding grounds when nutrient-poor surface waters shift eastward from the Western Pacific.

Subtle changes in the color of the ocean—which indicate shifts in the abundance and location of the phytoplankton (visible via the pigment chlorophyll-a)—were first observed from space by the Coastal Zone Color Scanner in the 1970s and 80s. In fact, imagery collected by CZCS during the very strong 1982-83 El Niño showed the regional demise of marine life around the Galapagos Islands. Fifteen years later, SeaWiFS compiled the first high quality, Pacific-wide view of chlorophyll-a during the very strong 1997-98 El Niño.

In one ironic twist, rainfall increases over the Eastern Pacific during an El Niño, which benefits life on the land. Even though life in the ocean is starving or moving to new feeding grounds, the plants and animals of the Galapagos and along the west coasts of North and South America usually get bountiful rain.

Changes in chlorophyll-a concentrations are visible in this animation, which compares phytoplankton in January and July 1998. Since then, scientists have improved both the collection and presentation of chlorophyll data. (Visualization courtesy of NASA/Goddard Space Flight Center, The SeaWiFS Project and ORBIMAGE, and the Scientific Visualization Studio.)

Although El Niño has the most direct impacts on life in the equatorial Pacific, its effects propagate north and south along the coast of the Americas, affecting marine life all around the Pacific.

According to Dan Rudnick of the Scripps Institution of Oceanography, changes in oceanic and atmospheric circulation off the coast of California—primarily changes in winds—decrease the normal upwelling of cooler, deep water. Additionally, atypical ocean currents can bring tropical species to California waters, such as manta rays, red tuna crabs, and yellow-bellied sea snakes.

Warm water in the Eastern and Central Pacific—and the moisture and energy it gives up to the atmosphere—fuels nascent tropical storms, enabling them to develop into hurricanes. Tropical storm development is also aided by typical El Niño wind patterns, which tend to have the same horizontal wind speeds and directions both near the surface and at higher altitudes. This lack of differences in wind velocity with height (that is, a lack of "wind shear") enables storms to continue pumping heat upward and to grow stronger. By contrast, there is greater wind shear over the Atlantic Ocean and Caribbean Sea during an El Niño, which inhibits hurricane formation by dissipating the upward motion of heat.

In the equatorial Pacific, as the warm pool propagates eastward, clouds and rainfall move with it and leave the Western Pacific in dry conditions that often lead to drought across Indonesia, southeast Asia, and northern Australia. The problems of drought are compounded by slash-and-burn land clearing. For example, in Indonesia it is common for farmers to clear-cut forests for lumber and to burn rainforest to develop the land. Normally, these fires are extinguished by the consistent rains that fall in the tropics. But when the rain dries up during a strong El Niño, those fires burn uncontrolled. Massive El Niño-fueled fires were blamed for thousands of premature deaths from air pollution in 1997-98 and contributed to as many as 100,000 deaths in 2015-16, according to a recent study by Harvard University scientists. 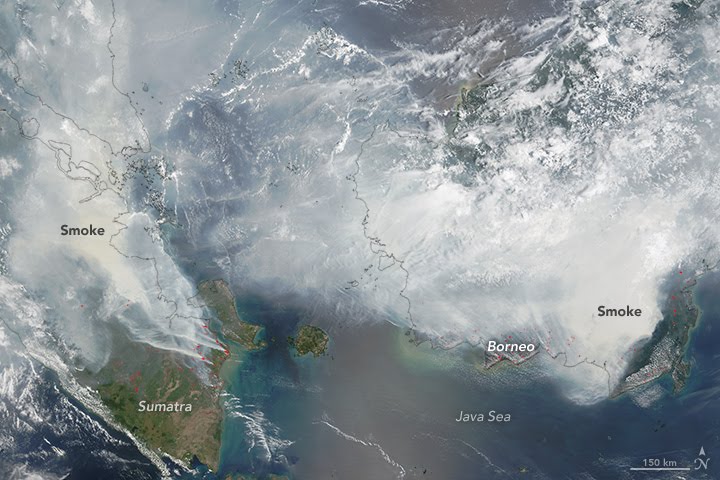 Wildfires also release extra carbon dioxide into the air. Vegetation that is stressed from heat and drought cannot absorb as much atmospheric carbon as it normally takes up during photosynthesis. Because of this, atmospheric CO2 (as measured at the Mauna Loa observatory in Hawaii) has less of a seasonal decline during the Northern Hemisphere growing season. Thus, the rise in atmospheric CO2 is more pronounced during El Niño years.

While the impacts of an El Niño are predominately felt in the tropical Pacific, the massive reorganization of ocean heat, clouds, rainfall, and winds can affect weather patterns in other parts of the world. The atmospheric jet stream becomes faster and shifts its position, displacing the usual location of high- and low-pressure systems and altering normal storm tracks. This, in turn, modifies wet and dry areas, causing some places to experience droughts while others may get floods, landslides, and a redistribution of groundwater.

Central America typically becomes warmer and drier during El Niño years. In 1998 and 2015, reduced rainfall led to low water in the Panama Canal, causing operators to restrict some large ships from making the passage.

In South America, Brazil typically experiences unusual heat. Less rain falls in the north, while more falls from southern Brazil to Argentina. Flooding in January 2016 displaced more than 150,000 people in Uruguay, Paraguay, and Argentina, and caused Paraguay’s Ministry of Public Health and Social Welfare to declare an alert for mosquito-borne diseases such as Dengue, Chikungunya, and Zika.

Although the impacts of every El Niño vary, more rain typically falls during the winter across the southern United States from California to Florida. For example, in 2015-16, the Pacific Northwest, the U.S. Midwest, and the Southeast states endured heavy rain. There were landslides in Northern California and flash floods in Louisiana and Alabama. Extreme rain fell in Southern California and led to mudslides.

The United Nations (U.N.) Office for the Coordination of Humanitarian Affairs reported in April 2016 that 60 million people across Africa, Asia, the Pacific, and Latin America needed food assistance due to weather extremes from the 2015-16 El Niño. Looking back at 1997-98, the U.N. attributed more than 20,000 deaths and $36 billion in infrastructure damage to that El Niño.

Although El Niño events are complex and evolve differently—as do their impacts and teleconnections—improved predictions would help communities to prepare for likely impacts and to minimize disruptions. With more advanced warning, resource managers and civic leaders could make adjustments to how they manage fisheries, which crops to plant, what resources to allocate to combating mosquitoes, and when to raise awareness of risks such as fire or mudslides.