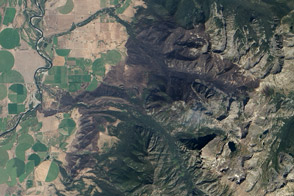 A fire in southern Montana destroyed homes in the small town of Pine Creek and left this burn scar.

The Advanced Land Imager (ALI) can “see” through thick wildfire smoke. On September 18, 2012, the satellite instrument captured this view of the burn scar beneath a heavy plume of smoke from the Mustang Complex fire in Idaho. 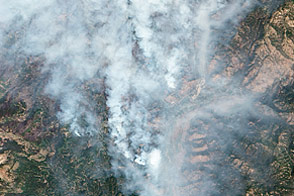 The Trinity Ridge fire in central Idaho was one of many fires burning in Idaho in August 2012.

An instrument on Suomi NPP captured these unique views of fires burning in the United States.