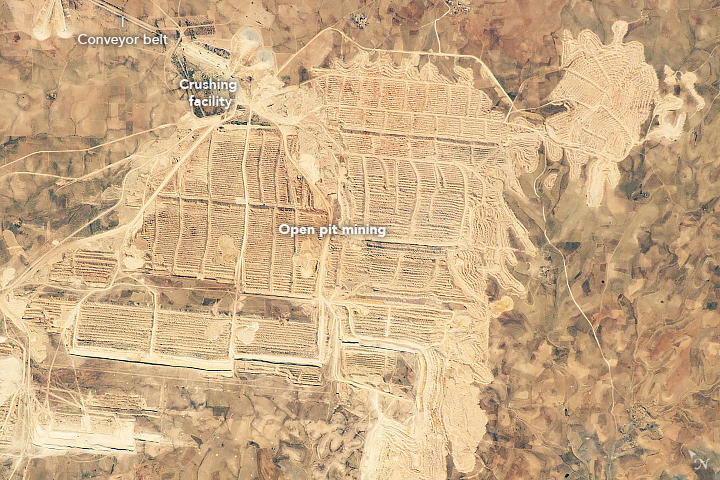 An astronaut aboard the International Space Station (ISS) shot this photograph of the Bou Craa open-cast (or open-pit) phosphate mine. Phosphate is a prime component of agricultural fertilizer, and Bou Craa is one of the largest phosphate mines in the world. The site produces around 2.4 million tons annually, 14 percent of the world’s production (2011).

Parallel trenches are cut into the phosphate deposits to facilitate extraction of the material. The mine is one of the few human patterns visible from space in this almost entirely uninhabited western extremity of the Sahara Desert.

The world’s longest conveyor belt (100 kilomters/60 miles) transports the rock to the coast for shipment to users around the world. Part of the conveyor belt appears near the central crushing facility. The belt structure, which carries 2,000 metric tons of rock per hour, is so long and straight that it has often attracted astronaut attention in this otherwise almost featureless landscape.

Most of the people in this territory either work at Bou Craa or live in the coastal town of El Aaiún, Western Sahara’s largest city. The area of the mine has grown significantly in the past five decades. Thorough reworking of the near-surface rock makes the early excavation patterns unrecognizable today.

Astronaut photograph ISS056-E-32453 was acquired on June 16, 2018, with a Nikon D5 digital camera using a 1600 millimeter lens and is provided by the ISS Crew Earth Observations Facility and the Earth Science and Remote Sensing Unit, Johnson Space Center. The image was taken by a member of the Expedition 56 crew. The image has been cropped and enhanced to improve contrast, and lens artifacts have been removed. The International Space Station Program supports the laboratory as part of the ISS National Lab to help astronauts take pictures of Earth that will be of the greatest value to scientists and the public, and to make those images freely available on the Internet. Additional images taken by astronauts and cosmonauts can be viewed at the NASA/JSC Gateway to Astronaut Photography of Earth. Caption by M. Justin Wilkinson, Texas State University, Jacobs Contract at NASA-JSC.