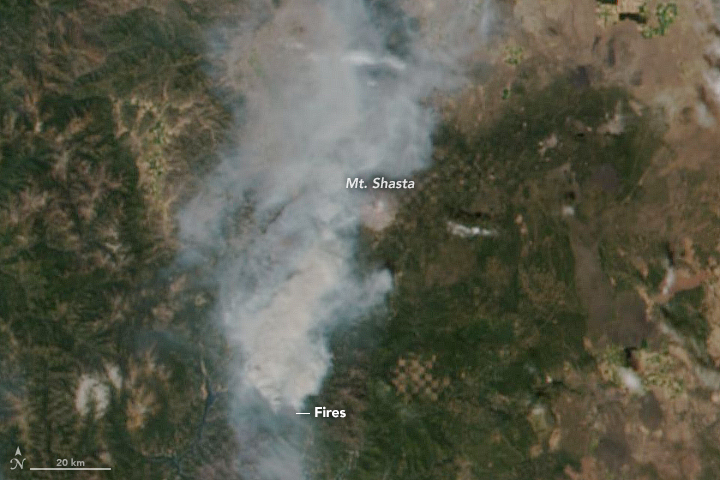 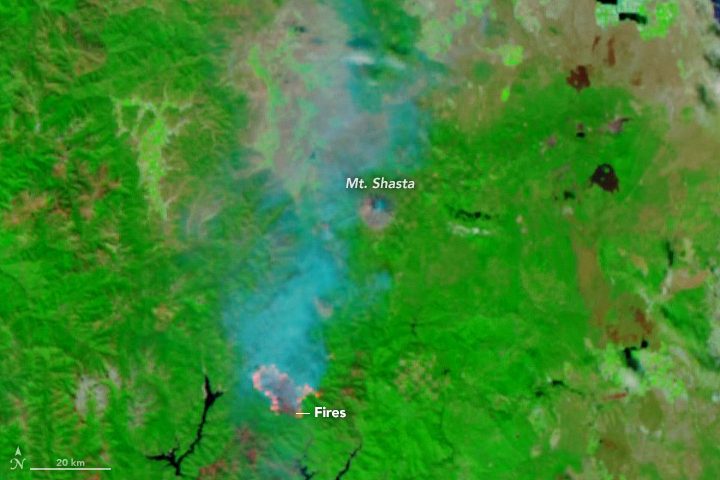 In early September 2018, yet another intense fire raged in northern California. The Delta Fire ignited on September 5, 2018, near Lakehead, California. It followed several others that kept skies in the region smoky for much of August.

The Visible Infrared Imaging Radiometer Suite (VIIRS) on the Suomi NPP satellite acquired these images of the blaze on September 6, 2018. In the natural-color image (left), a thick smoke plume streamed north from the fire, spreading a pall over Dunsmuir, Black Butte, and other towns along Interstate 5. The false-color image (right), which includes bands of shortwave infrared light, reveals the hot fire fronts (orange) and the burn scars (gray) left in the wake of the fire. Scientists from the University of Wisconsin-Madison noted the presence of a towering pyrocumulonimbus cloud billowing from the blaze on September 5.

The fire had charred roughly 22,000 acres (8,900 hectares) by September 7, 2018, and was making its way through rugged terrain of conifer forests, according to InciWeb. Firefighting officials expects the blaze to continue spreading along its north and northwest fronts due to a cold front that will bring gusty winds.

With the fire burning on both sides of Interstate 5, several drivers offered harrowing accounts of trying to escape the blazes. At least four trucks and several homes have been destroyed, according to news reports.

According to statistics from Cal Fire, 4,587 fires have burned 613,710 acres in California this year (through September 2, 2018). That is nearly four times the average burned in the state in each of the past five years.